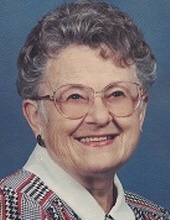 In the early evening of June 12, 2017, Yvonne Adelia Furman went to be with her Lord and to be reunited with family, friends and her sorely-missed late husband, Robert B. Furman. She is survived by her two children, Julie (Joseph) Stodolka and Robert B. Furman Jr (Janet Salerno), and a host of friends of many ages.

The youngest child of Edward and Ada Mathe, Yvonne was born on December 19, 1918 in Baton Rouge, Louisiana. Her family moved back to their original home of Wisconsin when she was a young child, where Yvonne's mother farmed her father-in-law's land while her father taught high school in St. Louis, Missouri.

Yvonne graduated from Almond High School in 1936 and from Lawrence College in 1940. She became engaged to Robert Furman in 1942, and began her high school teaching career during a 3-year separation while her fiancé served in the United States Army in the European Theater in World War II. She taught English, Latin and a variety of other subjects in Cashton, Edgerton and Appleton, Wisconsin. She and Bob were married on his return from the war on July 28, 1945 and their marriage endured until his death on March 12, 2002.

Bob and Yvonne had two children, Julie and Bob Jr., and moved frequently during the early years of her marriage -- Jackson, Fredonia, Marshfield, Kenosha and Wauwatosa, Wisconsin. They settled in Howards Grove in 1965 and built the house of their dreams in the country along the Sheboygan River outside the Village of Franklin. Yvonne lived in that home until November of 2016 when she moved to Harvest Home Senior Living in Howards Grove and, somewhat to her surprise, found herself thriving and happy in that new environment until her final short illness in May 2017.

A dedicated homemaker, Yvonne returned to teaching in Plymouth High School from 1967-1969, and to librarianship at Elkhart Lake High School after that. She retired for a second time in 1973, returning to her preferred role of housewife. Homemaking was her chief role in life, and all her activities radiated from her personal pleasure in home and family, and her demonstrable skill in maintaining a country home. After her husband's death, she found additional pleasure in personal hobbies: reading, refinishing furniture, scrap-booking and personal correspondence. In the early years of the 21st century, she learned how to use the computer, her "magic machine," writing a personal memoir and maintaining a wide email correspondence, until just the last few years.

Yvonne gained pleasure from her many friends, many of them from younger generations. They made her feel young as she associated with them, and were a large part of her feeling that growing old was a blessing. She acquired the name of Great Grandma Vonne from two generations of her friends' families, and those titles and kinships, were gifts which she treasured.

Beginning in the mid-1950's and until 2016, Yvonne gained notoriety with an annual Christmas letter, which she mailed to the many generations of family and friends she cherished. The mailing list, which had outlived the earlier recipients, expanded to include an increasing number of friends which spanned over three generations

St. Luke United Methodist Church of Sheboygan was Yvonne's church home for over 50 years, and she listened consistently to radio church broadcasts when she no longer could attend in person. St. Luke's was a continuing source of inspiration to her, and her service on the Senior Visiting Committee in earlier years gave her pleasure and close friendships which she valued.

A Memorial Service will be held on Wednesday, June 21, 2017 at 6:30 p.m. at Zimmer Westview Funeral & Cremation Care Center. Rev. Cindy Thompson, Pastor of St. Luke United Methodist Church, will officiate. A time of visitation and support will be held at the funeral home from 3:30 p.m. until the time of service.