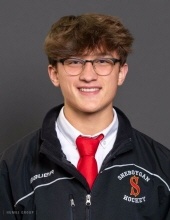 William "Will" Peder Johnson joined our heavenly father on Saturday, November 28, 2020 following a tragic accident.
Born November 6, 2004, in Sheboygan, Will was the son of Michael and Michelle Johnson. He attended Pigeon River Elementary, Urban Middle School and was a sophomore at Sheboygan North High School at the time of his passing.
Will had a passion for sports. This started during his younger years. He tumbled about the house and yard and was truly in constant motion and always extremely active. He was a member of the Red Raider Hockey team. He was also a member of the soccer and tennis teams at North High. He loved playing wiffle ball and other activities in the back yard with his family and friends. He was known for his consistent hustle and work ethic on the ice and field and was loved by his teammates and coaches alike.
Will loved to build things. From Legos to robotics or the fort on the bank behind our home he worked on with his dear friend for years, he was always tinkering and assembling. He aspired to be an engineer and enjoyed his coursework in this area at North High.
Will had a very large group of friends from all over the county and beyond. He was a true friend to everyone. His relationships with them were extremely special to him and he will be missed by them all. He dearly enjoyed time at home with his extended family. He loved to play games or just hang out watching movies with his relatives, He also spent a good amount of time teasing his little sister Elise. He was especially good at this and she misses it already.

Above all, the most important part of Will's life was his relationship with Christ. He was baptized and subsequently confirmed at First United Lutheran Church in Sheboygan. He was active in the church as an usher and was preparing for a mission trip with the Appalachian Service Project this past summer before it was cancelled due to the pandemic. None of his family members EVER remember Will being angry for any reason. He truly had a gentle soul that emanated love, forgiveness and a genuine care for all those around him. He had a quiet way of listening to people that put them at ease. It would be Will's wish that this accident would remind people of the transient nature of all of our lives and the importance of forming a loving relationship with Jesus. His life was a testament to this.
He is survived by his parents, Mike and Michelle Johnson of Sheboygan; Brother, Erik Johnson, student at UW-LaCrosse; Brother, Trevor Johnson, student at The Ohio State University; Elise Johnson student at Urban Middle School; Paternal Grandmother Rosine M. Johnson and Maternal Grandmother MaryAnn Hall; Maternal Grandfather Evan H. Schiltz. He was preceded in death by his paternal Grandfather David L. Johnson and maternal Grandfather David W. Hall.

Due to the pandemic, a private family service will be held. The service will be livestreamed on Will's obituary page on the funeral home's website for those who would like to join us virtually, at www.zimmerfuneralhome.com. The committal of his body will take place immediately following the service at Calvary cemetery in Sheboygan. www.zimmerfuneralhome.com.
The family deeply regrets its inability to have an open funeral and receiving line at their church for all those who loved Will. A celebration of Will's life will be held in 2021 at the First United Church in Sheboygan when friends and family can come together safely and share their love and memories of Will.

In Lieu of flowers, donations may be made to the William Johnson Memorial Fund at Bankfirst National in Sheboygan.
Will's family wishes to thank the staff and parishioners of First United Lutheran Church for their healing support; the work of the Sheboygan Police and Fire departments for their care and compassion amidst this tragedy; the Sheboygan hockey community for embracing Will's memory; friends, family and students for the overwhelming out pouring of love they have shown during this most difficult time. It truly shows the wonder our Lord can bring from tragedy and the effect a life well lived can have on all those who are touched by it.

To order memorial trees or send flowers to the family in memory of William Johnson, please visit our flower store.