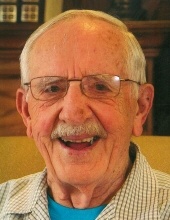 Wallace Henry Adler, age 96, a resident of Pine Haven Christian Communities - Giddings Campus in Sheboygan Falls, WI passed away Friday, July 10, 2020. Born on May 22, 1924 in Sheboygan, WI, to the late Henry and Anna (Gettman) Adler. He was united in marriage to Betty Platz on November 28, 1953 at Ebenezer Evangelical Reformed Church in Sheboygan; she preceded him in death on July 6, 2012.

Wally was a 1942 graduate of Sheboygan Central High School. He worked for J. Bensman Food Market in Sheboygan in the sales department and as a caddy at Pine Hills Country Club prior to his entering the U.S. Army in February 1943. He completed the Electrician Mechanic course in Los Angeles and was then sent overseas to Hawaii and served as an Anti Aircraft Artillery Gun Crewman 2601 where he supervised a team in the control of operations and tactical employment of crew and guns. He was honorably discharged in February 1946.

After returning home, he started work at the Sheboygan Sausage Company located at 14th and Huron Avenue as a customer service employee. In 1989 he retired after working there for over 42 years.

Wally and Betty enjoyed traveling, visiting Europe twice, cruising in Alaska and the Caribbean. They travelled throughout the United States visiting friends and relatives. Active at Ebenezer United Church, he taught Sunday school for 18 years, served as an usher, greeter, liturgist, on the building committee, and a member of the Men's Breakfast Club. As a World War II veteran, he was a member of VFW Post 9924 in Howards Grove where he participated in Memorial Day parades, loved to call Bingo, and served on various positions. His favorite pastimes were playing golf throughout Wisconsin, being an overall true Wisconsin sports fan, and the bingo games at Pine Haven with his fellow table friends. He also enjoyed visiting "the girls" at the National Exchange Bank & Trust in Howards Grove. Wally will be remembered for his sense of humor, one-liners, his kind-hearted always-friendly nature, and his infectious friendly smile.

A private memorial service with full military honors will be held at Ebenezer UCC officiated by Rev. Lorri Steward. The service will be available for viewing on Tuesday, August 4, 2020 at ebenezerucc.org and the Ebenezer Facebook page. A celebration of life will be held at a later date.

The family would like to extend a special thank you to the caring staff at Pine Haven Christian Home, especially Trisha, Tess, Cindy, Rose and Mary and the caregivers of Sharon S. Richardson Community Hospice. A heartfelt appreciation is extended to Carolyn and Mark Dreier for their years of kind and caring assistance.

In lieu of flowers, a memorial fund has been established in his name. Donations can be sent to Ebenezer UCC and Pine Haven Christian Communities.

To order memorial trees or send flowers to the family in memory of Wallace Adler, please visit our flower store.