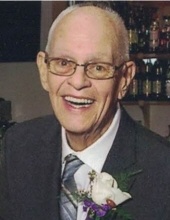 He was born in Manitowoc on March 7, 1941, to the late Robert and Carmen (Duebner) Mlada. He attended local schools and graduated from Lincoln High School. Tom married Madelyn Yost on August 21, 1959 and shared over 50 wonderful years together. She preceded him in death on November 30, 2012. On November 19, 2016, Tom married Kathleen Buechler at St. Peter of Alcantara in Port Washington. He was a member of the Knights of Columbus and was an active member of his parish community. Tom took great pride in building relationships with his clients while an insurance agent for Prudential Insurance Company and American Family Insurance.

Tom was an avid outdoorsman, who enjoyed spending time fishing, camping, and hiking. He also liked to golf, competing in leagues at Quit Qui Oc and Miller's Glen. Tom was a coach within the Sheboygan YMCA and the Sheboygan Recreation Department for over 30 years. He served as a varsity assistant girls and boys basketball coach, as well as a varsity football coach, at Chilton High School for 11 years. In 2008, Tom was named Packerland Conference Assistant Coach of the Year and was beloved by the student athletes he served. He concluded his coaching career as the assistant boys basketball coach at Elkhart Lake High School.

Tom was also a highly regarded musician, starting at a young age with the Bob Mlada Orchestra. In high school, he formed the band JL & the Comets, reconnecting with the original band members in recent years, playing in Manitowoc and at the Tiki Bar in Elkhart Lake.

Above his passions for coaching and music, Tom cherished his time with family most of all.

Tom is survived by his wife Kathy; his six children, Carrie (Steven) Jez of Beavercreek, OH, Jill (Jeff) Schuessler of Sheboygan Falls, Raymond (Kelly) Mlada of Chilton, Robin (Mark) Peck of Hartland, Amy (Tim) Winkel of Sheboygan, and Thomas J. (Kathy) Mlada of Grafton; 16 grandchildren; 13 great-grandchildren with one more on the way; a sister-in-law Kathryn Schipper; nieces, nephews, other family and friends are further survived.
He was also preceded in death by a grandson, Zachary Winkel; a brother, David and a sister, Bonnie.

A Mass of Christian Burial for Tom will be held at 5:15 PM on Thursday, January 30, 2020, at St. Thomas Aquinas Catholic Church, 94 N Lincoln St. in Elkhart Lake. The family will greet visitors on Thursday, at church, from 3 PM until 5 PM. Tom will be laid to rest in Riverside Cemetery in Oshkosh.

In lieu of flowers, a memorial fund has been established in Tom's name.

The family would like to personally thank the staff at Sharon S. Richardson Community Hospice for the compassionate care given to Tom.