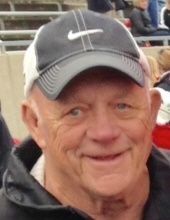 Thomas J. Hardy, of the town of Meeme, passed away Monday morning, July 6, 2020 at his home, surrounded by his family. He was 79 years old.

Thomas born January 2, 1941 in Sheboygan Falls, the son of Jerome Hardy and Lorraine Nacker. He graduated from Central High School in 1960, where he played football. He went on to study at UW - LaCrosse where he also played football for 2 years, and graduated from MIT in Milwaukee with a degree in General Mechanics and Autobody Work. He proudly served his country in the US Army Reserves. On November 20, 1965, he was united in marriage with Betty Jane Stroshane at St. Peter Claver Catholic Church in Sheboygan.

For 24 years, Tom worked as a mechanic at Kohler Company, retiring in 2003. Prior, he had worked at Schleinz Standard Station in Sheboygan as a mechanic for over 20 years. In his spare time, he was an avid woodworker, an Intarsia expert and created countless pieces that will be treasured by his family. A versatile handyman, he was a "Mr. Fix It" for his friends and family. In his spare time, he loved to golf, especially with his longtime friends, the "Swell Guys".

A Private Memorial Mass will be held at St. Peter Claver Catholic Church in Sheboygan. He will be laid to rest at Holy Cross Cemetery.

In lieu of flowers, memorials are suggested in Tom's name.

Please visit www.zimmerfuneralhome.com to leave online condolences for the family.

His legacy of love lives on in the hearts and voices of those who called him Dad and Grandpa.

Event Information
Services are private.
To order memorial trees or send flowers to the family in memory of Thomas Hardy, please visit our flower store.