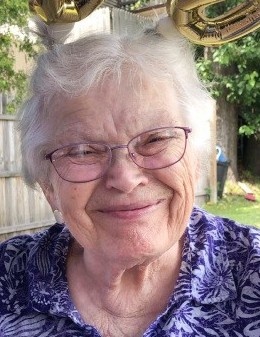 Shirley was born August 8, 1939 in the Town of Sheboygan to the late Erwin and Esther (Justus) Thiel. She attended Mapledale Grade School and she graduated from Central High School with the class of 1957. On September 3, 1960 she married Jerome Heibel at Ss. Cyril & Methodius Catholic Church in Sheboygan. Jerome preceded her in death on their 57th wedding anniversary, September 3, 2017. Shirley worked at St. Nicholas hospital and was a nanny for the Dr. Thomas Zweifel family for many years.

Shirley was known to friends and acquaintances as “Purple Shirley”. She loved the color purple and was known to have everything purple - even including two of her cars. Shirley loved to sing and was a member of the singing group, Sound Celebration, performing all over the state. She was an expert at knitting and crochet and she always had a project going. She really loved doing many different types of crafts and was always willing to volunteer her services. Shirley especially loved participating in the Citizens Bank Dress-a-Doll contests and she was so proud of the ribbons she was awarded.

On any bingo night, Shirley could be found with her friends at the local bingo games. She also loved bingo at casinos all over the country. Jerome and Shirley would travel to Las Vegas several times a year. Somehow, Shirley always had bingo luck.

One of Shirley’s passions was her 40 year involvement with the various T.O.P.S. groups in Sheboygan. She really enjoyed the camaraderie of her fellow members united in achieving weight loss goals.

A funeral service for Shirley will be held at 12 Noon on Thursday March 4, 2021 at Zimmer Westview Funeral Home and Cremation Care Center, W2132 Garton Road, Sheboygan. Friends may call at the funeral home on Thursday from 10:00 AM until the time of service. Please visit www.zimmerfuneral home.com to leave online condolences or for additional information.

To order memorial trees or send flowers to the family in memory of Shirley Heibel, please visit our flower store.