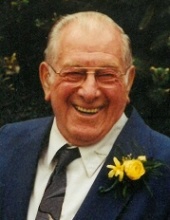 Roger H. Wehrmann, 88, of Sheboygan, passed away on Saturday, October 17, 2020 at Terrace Place in Sheboygan. He was born February 2, 1932 at home in the Town of Herman to Erwin and Leona (Schorer) Wehrmann. Roger attended Trinity Lutheran School in Sheboygan. On June 7, 1952 he was united in marriage to the love of his life Norma S. Wuestenhagen at St. Paul's Lutheran Church in Howards Grove. She preceded him in death on June 8, 2012.
Roger was a mason for many years. He then went on to drive school bus for Harms Bus Company in Howards Grove while also working for the Kohler Company retiring in 1992. Having a strong faith, he was a member of St. Paul Lutheran Church in Sheboygan Falls.
He loved being outdoors, camping, tending his garden and taking care of his yard. He enjoyed taking bus tours and playing Skat. You could always find Roger tinkering and fixing things in his spare time.
Roger is survived by his children; David (Patricia) Wehrmann of Howards Grove, Daniel (Patty) Wehrmann of Scottsdale, AZ, Patricia (Alan) Jenkins of Sheboygan Falls, Jerry (Carol) Wehrmann of St. Nazianz, and Randy (Lori) of Howards Grove, 14 grandchildren, 17 great-grandchildren, and 2 great-great-grandsons. He is further survived by his brother-in-law Gordon Wuestenhagen, sister-in-law Judy Boeldt, many nieces, nephews, other relatives and friends. He was preceded in death by his parents, wife, granddaughter Samantha Meinnert, sister Harriet (Ed) Winkel, infant sister Gertrude Wehrmann, sister-in-law Rosie Wuestenhagen and brother-in-law Norman Boeldt.
Due to the Covid 19 restrictions a private family service will be held.
In lieu of flowers memorials may be made to St. Paul Lutheran Church in Sheboygan Falls in Roger's name.


Roger's family wishes to sincerely thank Terrace Estates and Sharon S. Richardson Hospice for the loving care they provided for him.

To order memorial trees or send flowers to the family in memory of Roger Wehrmann, please visit our flower store.