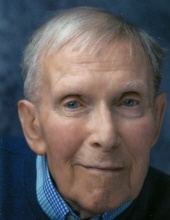 Robert Joseph "Bob" Nickodem, Sr., age 90, of Sheboygan, passed away Saturday, June 27, 2020. Born August 9, 1929 in Seymour, WI, to the late Theodore (Ted) and Clara (Kiedinger) Nickodem, he attended school in Seymour and graduated Valedictorian from Central Catholic High School in Green Bay. He went on to graduate from the University of Notre Dame with a Bachelor of Science and Accounting Degree and was Valedictorian of his class in 1951.

After graduating, Bob was employed by the Robert W. Baird Investment firm in Milwaukee for six months before entering the U.S. Army in 1952. While stationed in New Brunswick, Canada, Bob met his beloved bride-to-be, Margaret Moran of Dumbarton, Scotland. He served through to his honorable discharge in 1954.They were married July 1,1953 and he was honorably discharged in 1954. Margaret and Bob raised a family of eight children. Margaret preceded Bob in death on March 24,1996.

Bob began his career with the former Security First National Bank in Sheboygan in 1954 with the trust department, retiring in 1994 as Senior vice President and Trust Officer. He had been president of the Sheboygan Economics Club and president of the Wisconsin Trustees Association.

Active in the community, Bob was involved in various civic organizations including: The United Way; Kettle Moraine Council of the Boy Scouts, Sheboygan County Chamber. He served on the board of Camp Evergreen, Sheboygan Jaycees and named Jaycee of the Year; Chairman of the United Way Campaign; Downtown Rotary where he received the distinguished Good Citizenship Award, and was also a Paul Harris Fellow. He served on the Town of Sheboygan Board, was a member of the Sheboygan Yacht Club, and a past president of Pine Hills Golf & Country Club, where he was an active golfer, achieving two holes in one.

Bob was a voracious reader appreciating the Sheboygan Public Library as well as life-enriching travel, playing golf courses around the world including the links of Scotland and Ireland, plus a few brief winter retreats to warmer climes.

A committed man of faith, he was a member of St. Clement Catholic Church where he attended Mass, served as a trustee for twelve years, along with being a member of the finance committee. Bob Nickodem and Family and Maureen Yanko and Family individually celebrated Funeral Mass Celebrations of Life for deceased spouses in St. Clement Church. On Valentine's Day, February 14, 1998, Robert Joseph Nickodem married Maureen McKinnon Yanko in St. Clement Church filled to capacity.

With respect to health safety protocol with Covid-19, a private Mass of Christian Burial limited to family will be celebrated later in July by Rev. Fr. Matthew Widder with internment in Calvary Cemetery.

In lieu of flowers, a Memorial fund in the Name of Robert J. Nickodem has been established.

The Nickodem Family and extended family wishes to acknowledge the steadfast, compassionate care from Staff at Sheboygan Senior Care; St. Clement Parish Ministry Group; Sheboygan Noon rotary, US employees; Veterans Honor Ceremony for years of service; and devoted friends who contributed so much to Bob's quality of life.

Event Information
Services are private.
To order memorial trees or send flowers to the family in memory of Robert Nickodem, please visit our flower store.