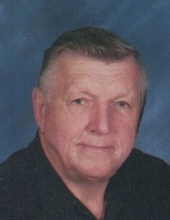 Robert was born to Melvin and Lorraine (Pieper) Laack on March 8, 1937. He graduated from Howards Grove High School in 1955.

In 1957, Robert enlisted in The United States Army and proudly served his country in the 3rd Infantry Division of the Rock of the Marne.

On November 12, 1960, Robert married the love of his life Sharon Dexheimmer in a ceremony at the United Church of Christ in Kiel. During their endearing 58 year union, they were blessed with two children and six grandchildren.

Robert was employed at Kohler company for 44 years, earning membership in the Quarter Century Club. He was a faithful member of St. Paul's Evangelical Lutheran Church in Howards Grove serving as an usher and trustee. Further notable community roles included umpire, referee, and proud member of the Howards Grove Athletic Club.

Robert enjoyed fishing, gardening, and dancing. He was an avid sports fan with a special love for the Chicago Cubs. Baseball remained a passion throughout his life. In 2004, his playing talents were officially recognized with induction into the Sheboygan County Baseball Hall of Fame.

Along with his devoted wife, Robert is survived by his children: Maria (Jeffrey) Bender and Mathew (Martina) Laack, along with grandchildren: Joshua, Jenny, Emily, Benjamin, Flynn and Nayla. He is further survived by his brother James (LaVerne) Laack and sisters-in-law Diana (Hubert) Nett, Sharleen (Donald) Mueller, Georgene Dexheimmer and numerous nieces, nephews, cousins and friends.

He was preceded in death by his parents, cherished in-laws Henry and Imogene Dexheimmer, brother-in-law Dennis Dexheimmer, nephews Dean Mueller and Michael Dexheimmer, nieces Trudy Luecke and Michelle Ackley-Mueller, and many other treasured aunts, uncles, cousins and friends.

A Funeral Service for Robert will be held at St. Paul's Evangelical Lutheran Church, 441 Millersville Avenue, Howards Grove at 3 pm on Saturday, November 16th. The family will greet visitors from noon until the time of the service, with Military honors to follow.

In lieu of flowers, a memorial fund has been established in Robert's name.

The family would like to extend a heartfelt thank you to Dr. Bettag, Jennifer and the whole staff at the Sheboygan Cancer & Blood Specialists of Sheboygan.