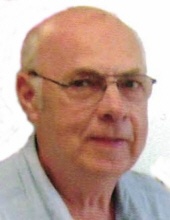 Robert J. Kummer, age 78, of Sheboygan died on Saturday, October 20, 2018 after a long and valiant battle with cancer.

Bob was born on April 22, 1940 to the late Walter and Theresa (Tauscheck) Kummer. Bob grew up in Kohler and graduated from Kohler High School with the class of 1958. Bob served his country as a member of the 32nd Division of the WI National Guard from 1958 to 1962, including one year in the United States Army at Fort Lewis in Washington during the Berlin Crisis. After high school Bob attended DeVry Technical Institute in Chicago. He spent the next 40 years at Kohler Company retiring in 2001 as a foreman in the Engine Plant.

On February 2, 1963 Bob married Judy Capelle, his high school sweetheart and only girlfriend, at Grace United Church of Christ in Kohler. Judy and Bob were married for 55 years and were blessed with three sons, Kurt, Bret, and Rob. They raised their family in Sheboygan. Bob was a member of Grace United Church of Christ. Bob and Judy enjoyed delivering Meals on Wheels. The very best part of Bob's life was his family, you could always depend on Dad! He spent most of his life riding on a motorcycle, enjoying the back roads of Wisconsin. Bob was happiest in his garage fixing something.

A Memorial Service for Bob will be held at 1:00 PM on Friday, October 26, 2018 at Zimmer Westview Funeral & Cremation Care Center, W2132 Garton Rd., Sheboygan, with Rev. Beth Petzke officiating. Family will greet visitors from 11:00 AM until the time of service at 1 PM. Inurnment will take place at Woodland Cemetery.

A memorial fund has been established in honor of Bob for Meals on Wheels of Sheboygan County or to Grace United Church of Christ in Kohler.

The family would like to personally thank their family and friends who have shown so much kindness and concern for Bob.

God saw him getting tired,
and a cure was not to be.
So he put his arms around
him and whispered, "come to me".
With tearful eyes we watched him suffer
and saw him slowly fade away.
Although we loved him dearly,
we could not make him stay.
A golden heart stopped beating,
hard working hands put to rest,
God broke our hearts to prove
he only takes the best.