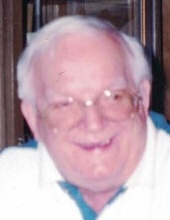 Robert "Bob" S. Hrgon, 89, of Sheboygan, passed away Friday, December 22, 2017 at Sharon S. Richardson Community Hospice. Bob was born December 28, 1927, in Sheboygan, to the late Steve and Mary (Vrckovic) Hrgon. On January 6, 1979, he married the former Bonnie Becker in Las Vegas. Bob was employed as a printer for 50 years and attained the title, Master Printer. He worked in different print shops in Sheboygan, Chicago and California. He also owned his own print shop in Chicago. Bob was a member of the SMBP (Santa Monica Bay Printers) of California. He was a member of St. Paul Lutheran Church in Sheboygan Falls. Bob was an avid sports fan and supported the Chicago Blackhawks, Green Bay Packers and the Wisconsin Badgers. He also worked for the LA Sharks Hockey Team. Bob enjoyed traveling, going on cruises, visiting casinos and reading the newspaper cover to cover.
In addition to his wife, Bonnie, he is survived by his son, Larry Hrgon (special friend, Jan Gregory), his sister, Sandy Gongaware (special friend, Dave Woelfel), twelve nieces and nephews, many great-nieces and nephews and great-great-nieces and nephews.
In addition to his parents, he was preceded in death by two sisters, Lillian "Babe" DoBas and Betty Fetterer, one nephew, Kevin Fetterer, a special aunt and uncle Helen and Mickey Krasovich, his mother and father-in-law, Harold and Doris Becker.
In accordance with Bob's wishes, no services will be held. Please visit www.zimmerfuneralhome.com to sign the guestbook.
A memorial fund has been established in his name.

Event Information
In accordance with the wishes of the deceased, no services will be held.
To order memorial trees or send flowers to the family in memory of Robert Hrgon, please visit our flower store.