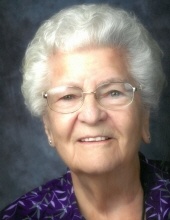 Regina Anna Malon, age 90, of Sheboygan passed away on Saturday, September 19, 2020, at Sheboygan Senior Community Center where she had been a resident the past two years.

She was born in Sheboygan on June 17, 1930, to the late Nicholas and Anna (Dozius) Jacoby. Regina grew up in Faha, Germany during World War II where she had received her education. At the age of 20, she came back to Sheboygan and in night school Regina met Chester Malon. The couple was married on August 18, 1951 at St. Peter Claver Catholic Church. Chester preceded her in death on June 15, 1987.
Regina worked at Kohler Company for almost 26 years and belonged to The Quarter Century Club. She was a member of St. Dominic Catholic Church where she was a part of the Dynamos, the Quilt Club, and volunteered her time on Saturday mornings at The Salvation Army preparing meals. She was also a member of Home and Community Education and enjoyed reading to the students at The Early Learning Center in Sheboygan.

Regina enjoyed golfing, cooking, traveling but above all, spending time with her family.

Regina is survived by her daughter, Carol Franzen; grandchildren, Jill (Will) Rash and Nicholas (Stephanie) Franzen; great-grandchildren, Benjamin, Bridget, Brayden, Logan, Evelyn, and Grace and her significant other, Marvin Barts. She is further survived by nieces, family and friends.

Along with her parents and husband, Regina was preceded in death by a son Steven Malon; son-in-law Craig Franzen and sisters, Hedwig (Edmund) Beringer and Annie (Philip) Breit.

A Mass of Christian Burial will be held for Regina at 11 AM on Thursday, September 24, 2020, at St. Dominic Catholic Church, 2133 N 22nd Street in Sheboygan. The family will greet friends on Thursday, at church from 10 AM until the time of service. Entombment will take place at Greenlawn Memorial Park.

In lieu of flowers, a memorial fund has been established in Regina's name.