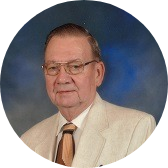 Otis was born July 12, 1941 in the Town of Sherman, Sheboygan County, the son of Elmer and Margaretha (Levsen) Meives. He attended Emmanuel Grade School in Adell, Plymouth High School and MSOE (Milwaukee School of Engineering) in Milwaukee.

On September 30, 1961 he was united in marriage to Donna M Sonnemann. They were blessed with four children, Debra, Barbara, Michael and Jennifer and were able to celebrate their 61st wedding anniversary this year.

He was employed by Pemco Inc., later Will-Pemco Inc. as an engineer for 40 years, retiring in 2001. As a 7th grader he designed and built his first riding garden tractor. During shop class at Plymouth High School he designed an improved model with front blade to which eventually he added hydraulics for a bucket and tiller. During his employment at Pemco he received 9 U.S. patents and several German patents for new designs of wrapping equipment used in the packing industry.

He was a devout member of Crossroads Community Church, Sheboygan. Otis enjoyed traveling (business and leisure), motorcycling, snowmobiling and also working outside at home, when they lived at Horseshoe Lake, making wood and plowing snow. He enjoyed his Kobota tractor which he used many, many hours. The last 10 years he enjoyed winters in Zapata, TX. Most special to him was his family- wife, children, grandchildren and great-grandchildren who all gave him much joy, love and laughter.

In addition to his parents, Otis was preceded in death by his son-in-law Fred Bilky, sister and brother- in-law Anna and Arthur Bunkelman, brother-in-law Prentice Scanland and his parents-in-law Alfred and LaVerne Sonneman.

Visitation for family and friends will be on Thursday, November 3rd and will be held at Crossroads Community Church at 4321 Co. Rd. A, Sheboygan from 9:00 AM to 10:45 AM followed by a celebration of life service. The cremains will be inurnment at Greenlawn Mausoleum at a later time. If you are not available to join the family for Otis’s service it will be live streamed on his obituary page on the funeral home website.

In lieu of flowers a memorial fund has been established in Otis’s name.

To order memorial trees or send flowers to the family in memory of Otis Edward Meives, please visit our flower store.