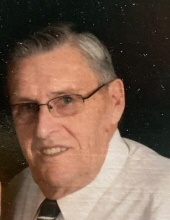 Myron (Mike) Loose was welcomed into heaven on October 30, 2020, after succumbing to complications of COVID-19.

Mike was born to Milford and Rufina (Lau) Loose on September 2, 1936. He was baptized and confirmed at St. John St. James Lutheran Church in Reedsville. He graduated from Reedsville High School in 1954. He proudly enlisted in the United States Marines Corp and served from 1954-1957.

Upon returning from service he met the love of his life, Laone (Tuddy) Meyer. They were married on April 11, 1959, at Maple Grove. The Lord blessed them with 61 years of marriage, two daughters, and six grandchildren.

Mike was always quiet and humble and loved his family deeply. For many years, he enjoyed family vacations to their cabin in Pembine, and he always loved a good game of sheepshead. Mike was happiest when attending his grandchildren's sporting events or treating them to a meal and then slipping them some cash to help them enjoy life a little more. He will be a Grandpa who is greatly missed. Mike was a member of St Paul's Lutheran Church in Howards Grove for over 50 years. He attended faithfully each week and served as an usher and on the stewardship committee; he was a role model of Christian faith for his family and friends.

For decades, Mike worked at Consolidated Freightways and was a member of the Local Teamsters. Eventually he began a career in maintenance from which he retired in 2000 after working twelve years for Sheboygan County.

Mike is survived by his loving wife, Tuddy and daughter Holly (David) Clappes and their children Megan Sixel (Adam Dircz) Jacob and Luke and his daughter Kelly (Brian) Stauss and their sons Zachary and Derek. He is further survived by his brother Donald (Jeannette) Loose, sister Marlene (Jerry) Lemke and brother Randall. He has many nieces and nephews who will miss their much loved uncle.

He was preceded in death by his parents, a grandson, Gerad Sixel, a granddaughter Lily Stauss and many beloved brothers and sisters in law.

A private, family only service will be held at St Paul's Evangelical Lutheran Church in Howards Grove on Saturday, November 14, 2020. A committal with military honors will follow at the cemetery.
Due to Covid-19 restrictions, the service will be livestreamed on Myron's obituary page on our website for those who would like to join us virtually.

In lieu of flowers a memorial is being established in his name.

The family would like to thank Pastor Aaron Mueller and Dr. Liang who provided Mike some comfort and care when his family could not be with him.