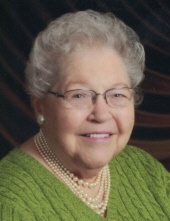 A gathering time will be held for Muriel at St. Mark Lutheran Church in Sheboygan on Saturday, May 1, 2021, from 11:00-11:30 AM with a service to follow at 11:30 AM. The wearing of face masks and social distancing will be required.

Burial took place at the family plot at Antigo Cemetery in Antigo, WI, on December 7, 2020.

The family would like to thank Zimmer Westview Funeral and Cremation Care Center for all the care that they have extended to them. They would also like to thank Meadowview Health Services and Compassus for the wonderful care given to Muriel.

You may sign the online guestbook and leave a message of sympathy online at www.zimmerfuneralhome.com

To order memorial trees or send flowers to the family in memory of Muriel Gill, please visit our flower store.