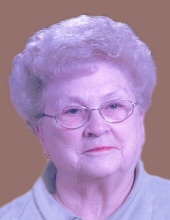 Margaret was born September 24, 1925 in the town of Herman to Frank and Elsie (nee Kalk) Heusterberg. She graduated from Howards Grove High School, and on August 13, 1943, she was united in marriage with Milton Breher. They were married for 69 years when Milton passed away in 2013.

Margaret and Milton were caretakers of Siemers Union Cemetery for 32 years. She was a member of Trinity Lutheran Church, Howards Grove.

She was preceded in death by her parents, sister Harriet Heusterberg and brothers Frank and Stanley Heusterberg.

Private family services will be held, with the Rev. Darrel Bergelin officiating. Entombment will be at Gardens of Peace Mausoleum.

The family would like to thank the staff on the second floor Memory Care Unit at Sunny Ridge and the girls of Compassus Hospice for all the care given to Margaret.

A memorial fund has been established for Trinity Lutheran Church, Howards Grove.

Event Information
Services are private.
To order memorial trees or send flowers to the family in memory of Margaret Breher, please visit our flower store.