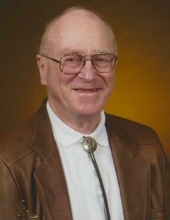 Louis E. Milsted, age 86 died on Wednesday, October 28th. He was born on September 10, 1934 in Madison, Wisconsin.
He is survived by his wife, Joyce, sons Lance (Shelly) Milsted and their son Luke of Columbia, Maryland and Dirk Milsted and his daughter Anna of Sheboygan, WI. A brother Daniel (Maria) Milsted, Niece Renee Milsted, nephews Timothy and Michael (DeAnne) Milsted and numbers grand nieces and nephews, cousins and friends.
Louis was preceded in death by his parents, Harry and Pearl Milsted of Madison, WI. and a granddaughter, Sierra Madison Milsted and other relatives.
He attended Lowell, Emerson and Madison Lutheran elementary schools and East High School in Madison, WI.
Louis was active in student government, vocal music and athletics. He was a National Honor Society member and was the 1952, 165 lb. State High School Wrestling Champion.
Following high school Louis joined the U.S. Navy Construction Battalion and served on Guam as a firefighter, sunday school superintendent and as a member of the Guam Choral Society.
Louis married Joyce Sperley on March 10th, 1956 in Madison, WI. They moved to Menominee, WI. where he earned a Bachelor and Masters degrees and graduated with highest honors from the University of Wisconsin-Stout.
Louis settled in the Sheboygan area in 1960 and pursued a career in teaching Industrial Areas at Sheboygan North, Cedar Grove and Kohler High Schools.
He was a four time recipient of the "Who's Who Among American Teachers" award and the 1999 Kohler High School annual was dedicated to him.
He served as a Camp Rokilio staff member and director, scoutmaster and staff member for 10 National Scout Jamborees and as a staff member and 2 time course director for 10 Wood Badge training courses (An adult Scout leader education program). He was on the staff of the 2007 World Scout Jamboree in England. He also served on numerous committees and staffs during his scouting career.
Louis was a member of the Boy Scouts of America earning the Eagle Scout Award. He served as the Troop 861 charter scoutmaster for 27 years, and on the Bay Lakes Council Executive Board as the Council Commissioner, Program Vice President, International Representative and Member at large. Louis was presented the Silver Beaver Award, Lamb Award, Distinguished Commissioner Award, District Award of Merit, the National Eagle Scout Association Eagle Scoutmaster Award, The Silver Antelope Award and was a James E. West Fellow.
Louis was a singer with the Lakeshore Chorale, and the Sheboygan Symphony Chorus. He served on the Friendship House Board of Directors and as a member of the Kettle Moraine State Forest Advisory Committee. Louis was a member of First United Lutheran Church (ELCA)and served as a choir member, congregation council member and president, Morning Star member and cook, Easter egg hunt organizer, and on numerous committees. He also served as synod assembly delegate, synod committee member and chairman, and synod council member.
On October 1st, 2017 Louis was inducted into the Madison East Athletic Hall of Fame for his athletic accomplishments as a wrestler, football player and track athlete.
Louis enjoyed deer hunting with a gun and bow, crafting projects in his home shop for friends and family, organizing neighborhood activities, domestic and world travel and working on projects at his 3 1/2 acre woods, yard and around the home.
A memorial service will be held at 11 A.M. at First United Lutheran Church, 2401 Kohler Memorial Drive, Sheboygan, Wisconsin. Following the service, there will be a reception in the fellowship hall with light refreshments. For those who wish to view online the ceremony will be live streamed on First United Lutheran Churches YouTube and Facebook pages.
Facebook: https://www.facebook.com/FULCELCA/
YouTube: https://www.youtube.com/channel/UCvS1bDV-LYGh_WOkBsulYQw/featured
The service will begin at 11 a.m. but there will be a streaming photo presentation in memory of Louis beginning at 10:45 a.m. if you would like to check in early.
In lieu of flowers memorial gifts may be made to First United Lutheran Church, Boy Scouts of America, Aurora Health Foundation or the charity job your choice.

To order memorial trees or send flowers to the family in memory of Louis Milsted, please visit our flower store.