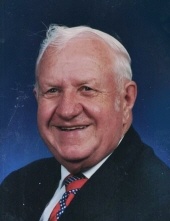 Leonard F. Becker passed away Sunday, August 30, 2020 at Sharon S. Richardson Community Hospice. He was 96 years old.
Born on May 6, 1924 in Milwaukee, Leonard was the son of the late Raymond and Jenny (Wendel) Becker. He attended Milwaukee Custer High School from 1939-1943 and was drafted into military service early in 1943, where he chose to enter the US Coast Guard. While in boot camp, Len took the medical corps test and passed, after which he spent one year training, first at the US Public Health Service Hospital, then at the Columbia University Medical School. He received a rating of Pharmacist Mate Third Class and, in the summer of 1944, reported to Camp Bradford in Virginia where he received amphibious training for the Landing Ship Tank (LST). Len then entered WWII in the Pacific Theatre, where he participated in battle star invasions at both Iwo Jima and Okinawa. While beached at Iwo Jima near Mt. Suribachi, LST-758, Len's ship, provided the flag that was raised as a sign of victory and which became the centerpiece of the iconic sculpture.
Len enrolled in college during the summer of 1946 at Milwaukee Teacher's College, which is now UW-Milwaukee. He majored in deaf education and graduated in 1949. Len's first position was in St. Paul, MN, where he taught deaf children from 1949 - 1951. At the same time, Len courted Betty Jane Pochert, whom he married on August 11, 1951. They started their life together in Oshkosh and Len began a new position there as a teacher at the Oshkosh School for the Deaf and Hard of Hearing. He continued working at the school, later becoming the principal after receiving his Master's Degree in 1962. Moreover, Len was a Clinical Audiologist at the Oshkosh Hearing Clinic. In 1968, Len moved the family to Shawano, where he took a position at CESA 3 for seven Northeastern Wisconsin counties as Director of Special Education.
A year later, Len relocated to Sheboygan to become the Coordinator of Special Education. When that position was cut in 1972, he became a classroom teacher at Wilson Elementary School. This was followed by a move to Farnsworth Middle School, where Len taught until his retirement in 1989. Being a strong believer in education, Len acquired 36 post-graduate credits at various universities including: UW-Oshkosh, Washington University in St. Louis, the University of Missouri, Ball State University, and Northwestern University.
In addition to being a lifetime educator, Len was elected to the Sheboygan Common Council for seven terms starting in 1972 and until he moved out of the 3rd district in 1986. As alderman, he served on various committees such as Public Protection and Safety; Street, Parks, and Public Works; Industrial Commission; and Animal Study. In addition, during part of his tenure he served as president of the council.
Len enjoyed his retirement years traveling in his motor home from coast-to-coast and to nearly every state. When at home, he often spent his mornings at the Kohler Sports Core working out and participating in the sundry activities. Many of Len's hours were spent outdoors working on landscaping, including the building of an impressive water feature. He stayed connected to friends and former educators by joining the retired teachers group SCARTA, becoming its president in 2001 and thereafter a member of its board. Len and his wife Betty also volunteered at the Sheboygan County Museum.
He was dedicated to the Catholic faith and a member of St. Dominic Parish, where he was an usher for many years. Len also taught high school CCD classes in both Oshkosh and Sheboygan during the 1960's and 1970's.
Len was a devoted husband, dad, grandfather, and great-grandfather. He loved his family and they loved him. He gave his all to whatever challenge came his way and to the people in his life. Len will be remembered for his many stories, which were both entertaining and informative. He was a great man who will be missed, but always remembered, always loved.
Survivors include: four children, Patricia (Charles) Batter of Sheboygan; Barbara Shangraw of Centennial, CO; Wayne (Samantha) Becker of Westminster, CO; and Martin Becker of Sheboygan; six grandchildren, Matthew (Edith) Shangraw; Celanire Shangraw; Rachel (Kyle) Reader; Brittany Becker; Alex Becker; and Zach Becker; one great-grandchild, Elizabeth (Matthew) Shangraw; and one sister, Marlene (Ray) Esser of Brookfield. Len was preceded in death by his wife, Betty Jane; his brother, Norman (Gertrude) Becker; and his sisters, Rita (Al) Gengler; and Dolores Becker.
Len's family would like to thank the caregivers at Pine Haven - Giddings Ave who cared for him this past year and who were his family when Covid-19 prevented visits with Dad, the staff at Memorial Hospital who supplied emergency care, and the individuals at Sharon Richardson Hospice who provided support and compassion during his passing.
A memorial service will be planned in 2021 when it is safe for all to travel.
Please visit www.zimmerfuneralhome.com to leave online condolences.

Event Information
Services will be set for a future date to be determined.
To order memorial trees or send flowers to the family in memory of Leonard Becker, please visit our flower store.