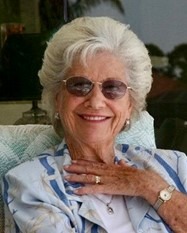 Lenore Kathryn (nee Harmeling) Leicht, formerly of Sheboygan, WI, peacefully went to be with her Lord and Savior on Friday, December 9, 2022, at the age of 96.

Born on March 23, 1926 to the late Dr. Jonathan and Lillian  (Bloemers) Harmeling in Hingham, Wisconsin. Lenore (Nory) was one of eight children and graduated from Central High School in Sheboygan.

During WWII she worked at R-Way Furniture Company building glider wings in support of the Allied war effort. Following the war, she and Richard F Leicht renewed a friendship they had enjoyed prior to Richard’s departure for military service. They were married on August 30, 1946 at Hope Reformed Church in Sheboygan, WI and celebrated 53 years of marriage prior to Richard’s unexpected passing in April of 2000.

Lenore devoted her life to family and church. A loving, generous and compassionate person, she enjoyed nothing more than to spend time with her siblings, children, grandchildren and great-grandchildren. Lenore had a beautiful singing voice and for 60 years was a faithful choir member, first at St. Luke Church in Sheboygan, WI and then at Burnt Store Presbyterian Church in Punta Gorda, FL. She was very involved with the United Methodist Women’s Rachel Circle at St. Luke Church and was always at the center of their work.

For many years she and Richard enjoyed spending winters in Florida and summers in Wisconsin. Together, they enjoyed boating and playing golf with family and friends. Following the death of Richard, Lenore continued to split her time between Wisconsin and Florida. In 2018 Lenore moved into assisted living at Pine Haven in Sheboygan Falls, WI. A few years later, during the COVID pandemic, she moved into the home and devoted care of her daughter Christine and son-in-law Craig Bowser in Winter Springs, Florida.

To everyone who had the privilege to meet her, Lenore was known as a kind, warm and gracious lady who accepted everyone just as they were. She lived an exemplary life of Christian faith that was an inspiration to others. She will be greatly missed, and fondly remembered, by many.

A celebration of Lenore’s life will be held at Hope Church in Sheboygan, located at 612 Ontario Ave., Sheboygan, WI, on February 25, 2023. Visitation will be from ten o’clock a.m. until commencement of service at twelve o’clock noon.

In lieu of flowers, and for those who wish to participate, a memorial fund has been established in Lenore’s name and will be directed to special needs at Hope Church.

To order memorial trees or send flowers to the family in memory of Lenore Kathryn (nee Harmeling) Leicht, please visit our flower store.