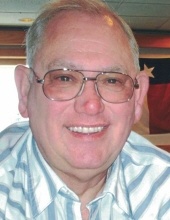 Larry D. Kunstmann "Ramrod", age 73, of Sheboygan Falls passed away on Saturday, January 4, 2020, at home surrounded by his family.

He was born in Sheboygan on September 14, 1946, to the late August and Hazel (Ellinger) Kunstmann. He graduated from South High School in 1964 and then proudly served his country in the United States Marine Corps. On September 15, 1973, he married DiAnn Kaas at St. Wendel Church in Cleveland. Larry drove truck for Piggly Wiggly for 33 years before retiring in 2006.

Larry enjoyed riding motorcycles, playing cards, and socializing with friends and family. He was an avid Brewers fan. He was active in the American Legion Post 83 in Sheboygan and even served as the Chapters President for a couple of years.

He was preceded in death by his wife, DiAnn; son Clint Kunstmann and a brother Howard Zeier.

A Celebration of Life for Larry will be held on Thursday, January 9, 2020, from 4 PM until 8 PM at the VFW Post 9156, 552 S. Evans St. in Sheboygan. Military Honors will take place during the celebration.

The family would like to personally thank the staff at Sharon S. Richardson Community Hospice for their care given to Larry. They would also like to thank the family who supported Larry during his brief illness.

In lieu of flowers, a memorial fund has been established in Larry's name.