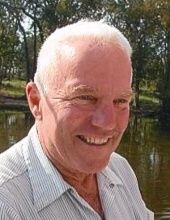 Kenneth A. Sabrowsky, 81, of Sheboygan, passed away on Friday, December 6, 2019 surrounded by his family at Sharon S. Richardson Community Hospice in Sheboygan Falls. He was born May 8, 1938 in Sheboygan to Edward and Lorena (Van Sluys) Sabrowsky. Ken graduated from Central High School and received his degree in electronics from DeVry University.
Ken proudly served in the US Army from 1957 to 1959, he then served in the US Army Reserves from 1959 to 1963. On October 1, 1960 he was united in marriage to Bernice Lubach at Luther Memorial Church in Sheboygan.
Ken worked in the maintenance department for the Kohler Company. He had a strong faith and was a member of The Lutheran Church of Our Redeemer. An avid outdoorsman, he was a member of Smerke's Sportsman's Club. He enjoyed fishing especially taking trips to Canada, trapshooting with friends and cheering on the Badgers, Packers, and Brewers. His family was very important to him. Ken cherished all the time spent creating lasting memories with them.
Ken is survived by his wife Bernice, daughter Cori (Ron) Sommer, son Gary ( Fiancée Inga Gehman) Sabrowsky, grandchildren, Monica and Kevin Sommer, brothers, Jerry (Audrey) Sabrowsky and Ralph (Robin) Sabrowsky, sisters, Gloria Schultz and Doris (Ernie) Koepke, and sisters-in-law Beth Sabrowsky and Doris Lubach. He was preceded in death by his parents, brother Roger, and brother-in-law Leon Schultz.
Per Ken's wishes, private family services have been held.
In lieu of flowers memorials may be made to either The Lutheran Church of Our Redeemer or Sharon S. Richardson Community Hospice in Ken's name.
The family would like to express their gratitude to the staff of Aurora Memorial Medical Center Sheboygan Emergency Department, the staff of St. Luke's Medical Center in Milwaukee, and the staff of Sharon S. Richardson Community Hospice for all their care, comfort and support.

To order memorial trees or send flowers to the family in memory of Kenneth Sabrowsky, please visit our flower store.