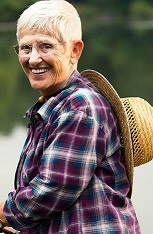 Judith B. Walter, 80, of Sheboygan, passed away on Friday, January 21, 2022, at Sheboygan Progressive Nursing Home.  She was born May 14, 1941, in Sheboygan to Katherine (Farner) Zittle.  Judith was very close to her grandparents Isabell and Sonny Gau, she spent a lot of with them growing up.  She graduated from Central High School and then went on to receive her teaching degree from UW Milwaukee and her master’s degree from Concordia University in Psychology.

Traveling and fishing were passions of Judith, she was a world traveler, spending four years in Germany, and traveling throughout Europe. She also took tips to Canada, Puerto Rico, and many other places.   One of her most memorable trips was to Russia, where she participated in a teacher exchange program.

Her family was very important to her, and she loved spending time with them creating many cherished memories.  Judith was married to Edward Walter, together they raised their two children Christine England and Michael Walter.

Judith is further survived by her grandchildren; Christopher (Linda) England, Abbigail Walter and Matt Guercio, great-granddaughter Coraline England, sister Sandi (Richard) Hed and brother-in-law Gordie Froehlich. She is further survived by her nephew Ricky; nieces, Julie Hed and Kathy Hed Nennig along with many relatives and friends. She was preceded in death by her grandparents, parents, and sisters Patty and Penny Froehlich.

Following Judith’s wishes cremation will take place and a private family service will be held at a later date.

The family would like to express their gratitude to the staff at Sharon S. Richardson Hospice and Progressive Nursing Home for there care, compassion, and support during this time.

To order memorial trees or send flowers to the family in memory of Judith Walter, please visit our flower store.