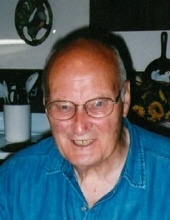 John P. Schema, age 85, of Sheboygan passed away on Thursday, November 22, 2018.
John was born in Sheboygan on June 23, 1933 to the late John and Mary Schema. He attended local schools and graduated from Central High School. After high school John proudly served his country in the United States Army. He was united in marriage to Arlene Wallander on April 17, 1971 at St. Dominic Catholic Church in Sheboygan. She preceded him in death in 2012. He was a painter early on in his life. He then was employed at St. Nicholas Hospital as a security guard/maintenance until his retirement.
John was a member of Knights of Columbus, The Elks Lodge and The Coin Club. He was an avid deer hunter and trap shooter. Just recently John also enjoyed artistically painting. He also had a passion for cars and enjoyed attending any local car shows.
John is survived by his son Bryon (Susan) Schema.
Along with his parents and wife Arlene, he was preceded in death by a brother Julius Schema.
A private inurnment at Holy Cross Cemetery will take place at a later date.

Event Information
Services are private.
To order memorial trees or send flowers to the family in memory of John Schema, please visit our flower store.