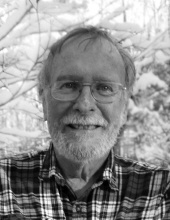 "Things aren't quite as simple as we thought." These words, spoken one year and one week before his death, marked the beginning of his diagnosis with esophageal cancer. John Malcolm Husband was born October 3, 1942 in Middlesbrough, England and died November 15, 2017. His parents were Edith and Clifford Husband, but it was his grandmother, Mabel Allen, whom he considered the person who really raised him. Growing up, he had a love for nature and all things related to science. This led to his training as a science teacher, a career that eventually brought him to the United States.
In his youth, he was a restless vagabond and lived and worked in Norway and Finland. His pastimes ranged from rock climbing in Scotland to singing folk songs in pubs; restoring vintage cars to raising exotic finches.
In August of 1968, sailing aboard the Empress of England to emigrate to Canada, he met his future wife, Kirsten Johnson. In 1971 he came to Cleveland, Wisconsin to help her family tackle the restoration of a ramshackle old farmhouse and start a hobby farm, "Windgather." They were married that October and celebrated their 46th anniversary this year.
John was the Sheboygan County Humane Officer in the early 1970's. He ran the shelter, was the law enforcement officer for all animal cruelty cases, and hosted a radio program that covered anything animal related. He joked that people called in just to hear his English accent. He handled everything from bee swarms and injured hawks to stray dogs and cats stuck in trees.
John also worked at Kohler Company, first as the manager of River Wildlife and then of the Design Center. He joined in the vision of Blackwolf Run while mounted on horseback and even provided the plow for The Horse and Plow restaurant. He also wrote the book, Environs, which tells the Kohler story. He loved being a part of the dynamics and development of the now famous hospitality enterprise.
His teaching career brought him to Saint Dominic's and Holy Family schools in Sheboygan. He taught with passion and humor and instilled his love of science into students of all ages. He sparked critical thinking, curiosity and creativity. His students loved his classes, and parents often remarked, rolling their eyes, that, "Mr. Husband says...", was a common dinner table refrain. He rarely gave homework, but often sneaked in a little extra recess time.
In 2001, John proudly became a US citizen. He was passionate about politics and never failed to vote. He was elected to the Cleveland Village Board and served-with some irony-as the Weed Commissioner.
Windgather, the family's 150-acre wildlife sanctuary is John's legacy. He was a conservationist at heart and had the skill and foresight to see and develop the potential in a neglected piece of farmland. As a naturalist, he amazed us all with his knowledge. He knew all plants and creatures that crossed our paths.
John was a bit of a legend here in his small corner of the world. He was equally at home in the boardroom and the barroom. He was always eager to meet new people and was a welcoming host, ready to pour you a drink, sit down and talk.
John was recently featured in Aurora's Cancer Knows No Boarders campaign. Throughout this year he handled his diagnosis and disease with remarkable courage and his characteristic, and sometimes macabre humor. This made everything much easier on his family, and even his caregivers. The last time he left the oncology office, having decided to stop all treatments and knowing that his death was inevitable, John made a comment that made us all burst out laughing. That, is how he lived his life.
John is survived by his wife Kirsten, daughters Fiona Redhair (J.T.) and Megan Husband (Mike Duschak), grandsons Henry and James Redhair and Jens Duschak, and a grandchild due in March. He is also survived by his two sisters in England, Patricia Pease (Malcolm) and Christine Osborne (Tony). Nieces, Christine Pease ( Phil Aspery) , Katharine Gibbs (Star) and family, Amber Johnson Krueger ( Eric) and family, nephew, Tristan Johnson and their mother, Misa Roach. Brothers-in law, John Scott, Rolf Johnson (Elda Brizuela) and Kurt Johnson.
The family would like to thank all the physicians, nurses, techs, and office staff who were also a part of this journey, especially the marvelous nurses at the Vince Lombardi Cancer Center and the Sharon Richardson Community Hospice. Dr. Kumar, you always dealt with us with honesty as well as optimism and we are all so grateful for that. And to Ron, John's cancer navigator, who was always there to catch us when we started to flounder, a most sincere thank you. We appreciate the community's love and support during this difficult time.
Family and friends, please join us in a celebration of John's remarkable life on Sunday, December 3, 2017 from 2:00-5:00pm at the Wisconsin Maritime Museum, 75 Maritime Drive, Manitowoc, WI. Please visit www.zimmerfuneralhome.com to sign the guestbook. In his memory, John requested donations to Public Television (Milwaukee PBS). The news, documentaries, nature programs and British television imports were a daily part of his life for the past 45 years. Donations can be made online at MilwaukeePBS.org, using the "donate" tab, or by check to Milwaukee PBS, 1036 N. 8th Street, Milwaukee, WI 53233, with John's name in the memo section.