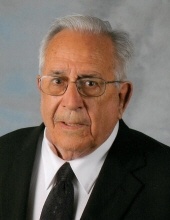 Jerome was born April 3, 1926, in Sheboygan, to the late Frank and Dena (Leys) Den Boer. He attended Sheboygan Christian School and graduated from Sheboygan North High School in 1944. He enlisted in the United States Navy in 1944 and served in the Pacific Theater during World War II as Signalman Second Class before being honorably discharged with the unconditional surrender of the Axis Powers in 1946. In 1948 he started serving his apprenticeship as a union carpenter. He retired from work in 1988 but remained active in Carpenters Local 731 activities for over 70 years. These activities included serving on the Carpenter's Apprenticeship Board at LTC, being labor council delegate and serving on various city housing boards. In 2001, Jerome was named AFL-CIO Local 731 Labor Person of the Year. On November 1, 1950, he was united in marriage to the former Beverly Bille. She preceded him in death on January 25, 1990. He was a member of Christ Community Church, formerly First Christian Reformed Church, Sheboygan.

In addition to his parents and wife, he was preceded in death by one brother, Howard and one son-in-law, Daniel Flagstad.

A Memorial Service will be held at 4:00 PM on Thursday, August 29, 2019 at Zimmer Westview Funeral and Cremation Care Center, W2132 Garton Road (Hwy 42 & JJ), Sheboygan. Pastor Josh Van Engen and Pastor Larry Meyer will officiate. The family will receive visitors at the funeral home on Thursday from 2:00-4:00PM. Full military honors will follow the service.

A memorial fund has been established in Jerome's name to be used for Sheboygan Christian School.