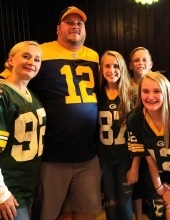 Jason Scott Hundt lived a life that was centered around the people he loved. He was always present in important events for his wife and children. He attended every performance by his daughters Raven and Jada at Brittany's school of Dance. He loved his daughters' passions, talents and dedication to the art of dance and being part of a dance family. Jason was committed to coaching his son, Mason's baseball team the Diamond Dawgs, and prided himself in respect for professional sportsmanship, working hard to achieve excellence and the importance of teamwork. He shared a lifelong passion for sports with his wife Orlean and they attended as many Milwaukee Brewers and Green Bay Packers games as possible.

Jason was family oriented and made it a priority to spend holidays, always returning to his home town of Suamico to spend time with his Mother Sue and Father Scott, and his sisters Jennifer and Maggie. He cherished his grandparents and their involvement in his childhood, their impact on him, and how he chose to live his life. (Jason did everything in his ability to help them in their lives. He did all that he was able, to return their love they had given him.)

Jason attended Bay Port High School in Howard and where he played baseball and football. As an adult Jason moved to Sheboygan where he lived happily with his wife and children. Jason's family and friends share many memories of gatherings hosted by Jason or that he attended, always cooking food for others, he was an excellent chef. If the party happened to be his friend's home, he would then be bringing homemade food and sporting a cooler on wheels along with napkins, straws and condiments - that was a definite staple. He loved to entertain. He lived to socialize, and to visit with others at his favorite establishments with his friends a like Shuff's Last Resort, Legend Larry's Green Bay, Silver Fern, Manning's Irish Pub and Water Street Pub.

He was proud of his career spanning 17 years of service for General Beverage. He began working as a salesperson and advanced to the final promotion of District Sales Manager, Spirits Division. His pride in delivering excellence in service was felt as was his true loyalty, thoughtfulness and commitment to his work. His work family was special to him and where some friends came into his life and stayed forever.

Jason was a charismatic, charming personality. He was truly happy and most often smiling and laughing. His fabulously reenacted stories were captivating, narrated with emotion and small inserts of his opinion, big eyes, nodding head, boisterous laughter and physically telling his story. He often had his arms up to show the enormity of the story he was telling. He was hilariously funny, he would loudly chuckle along with everyone in the room. He really was usually laughing at himself, but his laughter was contagious, as was his smile. He had bright eyes, a perfectly shaven face and a glowing smile. He liked to debate and discuss current events and politics, Jason always had an opinion.

Jason loved to organize family road trips and vacations across the country. His life was dedicated to his family and he was committed to his children having experiences.

Jason was an exemplary man who instilled work ethic and being a good human being in others. This precedent was set not by words, but by his own example. He was very old fashioned in his view of life and hard work and providing for others. He credited this being taught to him through his relationship with his parents and grandparents.

Jason was proud. He was enormously proud of his friends. He would boast of their hobbies, musical talent, racing, entrepreneurship and he made it a priority to support them. Jason was also often heard saying "I'm friends with that guy" and social media posts #hesmyfriend. He had many friends from childhood into adulthood, was very reliable and a constant in the lives of his friends and that included their children. He was the unrelated uncle that would tease and joke with kids, and those kids adored him and knew that he was a trusted role model. His friends were a big part of his life and although there isn't enough room on paper to list them, they know who they were. Especially if they had ever been coerced into a project that Jason needed help with.

Although he was a wonderful friend, Jason's legacy in his beautiful life was the deep love he had for his wife and children. Jason loved Orlean with his entire being and made sure that he treated her amazingly. He was always thoughtful of her, and never made a decision without her. He was kind, caring and protective. He was always respectful to her and planned his day around making her happy and made sure that she was always taken care of.

Jason and his daughter Raven had a special relationship that he cherished. As a stepfather he didn't ever act as though there was anything different than by a blood relation. He loved being in her life and their unique relationship of arguments and making up after them. He was very proud to take her to drop her off at UW Oshkosh for her first year of college.

Jason's daughter Jada was his princess and he beamed confidence and adoration when talking about her personality or talents. Jada worked hard to save to buy her first car; this was a monumental moment for a father to see her responsibility come to fruition. He credited her ability to reason and verbalize her point of view. He listened to his kids and would value their opinions especially when they disagreed.

Mason was Jason's pride and Joy. He never missed an opportunity to discuss his kindness or athletic ability or trademark monotone humor. They had many experiences of working together; endlessly sharing their love for sports, and Mason showed his inherited gift of recall of statistics, monumental games and knowledge about renowned athletes. Jason and Mason watched many games together and had great conversations, whether it was cheering or being disappointed by a Brewers or Packers loss.
Jason, Orlean, Neil and Micky shared the responsibilities to raise Raven, Jada, and Mason together. Each of these loving parents treated all three children as their own. Over the years they built a supportive blended family.
Jason will be lovingly remembered by his wife Orlean; children Raven, Jada and Mason; his parents Scott and Sue Hundt; his sisters Jennifer (James), Maggie; and nieces and nephews.
Jason was preceded in death by his paternal grandparents Edward and Germaine Hundt and his maternal grandparents Harold and Charlotte Krielkamp.

Jason's beautiful soul and exemplary personality and actions will be sorely missed by everyone who shared a relationship with this very special man.

Event Information
Services will be set for a future date to be determined.
To order memorial trees or send flowers to the family in memory of Jason Hundt, please visit our flower store.