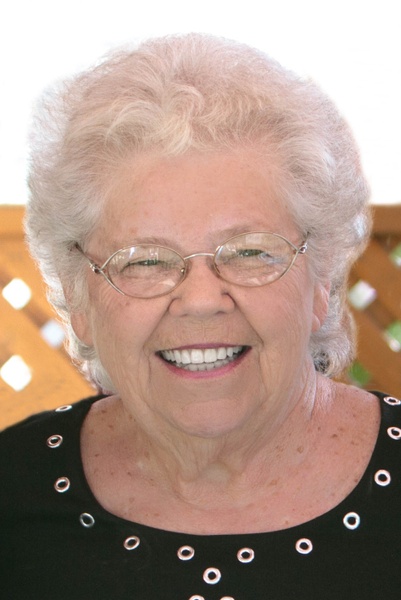 Janice Biorn Wells was born September 1, 1930 in Manitowoc, Wisconsin to Robert and Lillian Wells and died on April 27,2021 at the age of 90 at Pine Haven Christian Home in Sheboygan Falls where she was a resident for the last two years.

When Janice was young, the family moved to Sheboygan Falls and she was joined by brother Richard Wells (Kathleen) and sister Barbara (Robert) Boedeker, both of whom she adored.  She was an avid horse rider as a young lady.  Janice attended local schools and graduated from Sheboygan Falls High School where she met the love of her life, Jerome Hildebrand.  Janice and Jerry were united in marriage on August 18, 1951 and enjoyed more than 61 years together, until the time of Jerry’s death in 2012.  Together they had four children.

In her younger years, Janice worked part-time at the Sheboygan Falls Library.  She was both a den mother for Cub Scouts and a Camp Fire leader.  Janice enjoyed reading, crossword puzzles and knitting, all hobbies that lasted until her final years.  Each of her children and grandchildren received knitted sweaters and blankets, several still cherished articles to this day.  She enjoyed working outside the home and after her children were of school age, she went to work for the Sheboygan Press as a librarian for 25 years.  Janice was a talented writer and while working at the newspaper, she wrote a popular weekly column named “Faded Genes”.

Janice’s lifelong love of family and history led her to her greatest passion, genealogy.  Many a family vacation included a side trip to a courthouse or cemetery to document names and dates in her quest for information as this was the time before personal computers and the ease of sharing data over the internet.  She became the family historian and relished this role, writing many books over the years including those for family and local businesses.

In the 1980s, Janice was an original and active member of a small team of volunteers that restored the oldest standing building in the county, the Mill House on Water Street in Sheboygan Falls and established the Sheboygan County Historical Research Center, a research library of Sheboygan County history.  The Mill House was named to the National Register of Historic Places as part of the Cole Historic District which was a huge source of pride for Janice.  She continued to volunteer at the Research Center for the next several decades.

Janice was kind and generous and lived a life full of love.  Family was important to her and she loved to celebrate holidays and special occasions with her children and their families.  She enjoyed many a shopping excursion with her daughters where they talked non-stop and could be easily spotted in matching shirts, taking in a movie, drinking wine and having dinner at a favorite restaurant.  Janice was known to be “brutally honest” and this feisty side of her personality was with her until the very end, keeping her caregivers on their toes.  We like to think that Janice is in heaven now with dad and she is enjoying her favorite four “C’s” – Coke, Chips, Chocolate and Cigarettes!

Janice is survived by her four loving children Robert (Linda), Sharon (Randy) Fischer, Julie (Steven) Voight and Sara (Kevin) Marti, all of Sheboygan Falls.  She is further survived by nine beloved grandsons, her own baseball team, John, Eric (Amanda), Paul (Kelly) and Lawrence Hildebrand, Anthony, Andrew (Leah) and Michael Voight, Jacob and Samuel Marti, six great grandchildren, and several nieces and nephews.  She is also survived by her two siblings and their spouses.

Janice was proceeded in death by her parents, her husband and sisters-in-law and brothers-in-law, JoAnn and Donald Chase and Leonard and Joyce Hildebrand.

Visitation will be held on Friday, May 7, 2021 at Blessed Trinity Catholic Church in Sheboygan Falls from 10:00 a.m. until the time of Mass at 11:00 a.m. and will be laid to rest next to Jerry at St. Mary’s Cemetery after mass.  In lieu of flowers, memorials to Sharon S. Richardson Community Hospice or Sheboygan County Historical Research Center are appreciated.

The family would like to extend a special thank you to the caregivers at Pine Haven – Giddings Campus for the love, compassion and support they provided, especially during the year-long Covid-19 lockdown, whereby the staff members also served the critical roles of family and friend while nursing home residents were quarantined from the entire outside world.  The family also wants to acknowledge Craig, her favorite caregiver at Pine Haven, and Karen, affectionately known as her “Tuesday Friend”, for her countless visits and caring counsel to family.

Rest in peace Mom… until we meet again!

For additional information, to leave online condolences or to view the livestream of the Mass, please visit www.zimmerfuneralhome.com

To order memorial trees or send flowers to the family in memory of Janice Hildebrand, please visit our flower store.