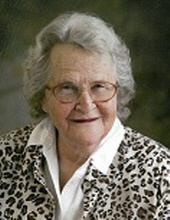 Janet Elaine Sauer, 86, passed away on Thursday, October 22, 2020 at Pine Haven Covenant Home in Sheboygan Falls. She was born September 25, 1934, in Stevens Point to Charles and Florence (Bergstrom) Purgett. Janet graduated in 1952 from Owen-Withe High School in central Wisconsin.
On September 19, 1953, she was united in marriage to Otto David Sauer in Milwaukee. They were married for nearly 57 years; he preceded her in death August 6, 2010.
Janet was the Site Manager at the Howards Grove Senior Center for 21 years until her retirement in 1998. She took great pride in her role, and will always be remembered for her smile, kindness, and the genuine affection she gave to everyone she met. Her love of conversation put everyone at ease; she touched so many lives by taking the time to listen and make people feel truly important.
Following her retirement, Janet and Otto moved 'up north' to Townsend, where they were the unofficial mayors of Harmony Lane. While in Townsend, she was a member of the Lions Club and the VFW Auxiliary. Having a strong faith, Janet was an active member of Immanuel UCC in Plymouth and of Forest Larger First Presbyterian Church in Lakewood, where she served as a deacon and on the Ladies' Guilds.
Janet was known for making the best raspberry and blackberry jams. She really enjoyed baking and was always bringing pies to charity functions. Her favorite time of year was when she could take the grandchildren strawberry picking up north. Her family was very important to her and she loved creating lasting memories with each of them. Janet was also an avid reader and she loved gardening.
Janet is survived by her 5 children: Rhonda (Gary) Adler of Nevada City, CA, Renee (Bob) Gavin of Sheboygan, Otto Ross Sauer of Sheboygan, Regina (Steve) Steinhardt of Ada, and Ramona (friend Mike) Priem of Sheboygan Falls, by 7 grandchildren: Eric (Trine) Konz, Matthew Konz, Andrea (Mario) Gomez, Phillip Priem, Samantha Priem, Courtney Steinhardt and Michaela Steinhardt, by 7 great-grandchildren: Amalia Rincon, Azelea Rincon, Astreya Rincon, Angelita Rincon, Myah Konz, Austin Konz, and Madison Konz, and by her great-great-grandson Aesai Valenciana. She is further survived by many nieces, nephews, other relatives and friends. Janet was preceded in death by her parents, husband, two sisters and two brothers.
Due to the Covid-19 restrictions, a Celebration of Janet's Life will be held at a later date.
Please join us on Janet's obituary page at www.zimmerfuneralhome.com, Thursday, October 29, 2020 from 1:00 PM until 1:20 PM for a livestream of the family visitation. The livestream of her committal service at Immanuel UCC Cemetery will be at 2:00 PM. If you are not able to join us live, the visitation and service will be recorded and can be viewed afterwards at any time.

Please log on to watch a family DVD http://player.tributecenteronline.com/74094


In lieu of flowers, memorials may be sent to Immanuel UCC Church in Janet's name.
The family would like to thank the staff of Pine Haven and Sharon S. Richardson Hospice for all of their care, compassion and support.

To order memorial trees or send flowers to the family in memory of Janet Sauer, please visit our flower store.