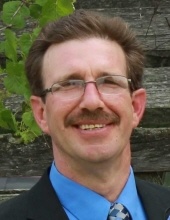 James T. Lombardo Jr., of Fond du Lac and formerly of Sheboygan and Tomahawk, passed away Monday, December 11, 2017 at Theda Clark Regional Medical Center in Neenah. He was 51 years old.
Jim was born October 5, 1966 in Sheboygan, the son of J. Thomas and Mary (nee Fermanich) Lombardo. He attended St. Peter Claver school, graduated from Sheboygan South High School in 1985, and went on to earn his Associates Degree in Police Science from Lakeshore Technical College. From 1987-1990, Jim proudly served his country in the United States Army as a military police officer.
On June 14, 2014 he was united in marriage with Marisa Flores in Shawano.
Jim was a truck driver, most recently for XPO Logistics in Fond du Lac. He was an avid Wisconsin sports fan and outdoorsman who loved hunting and fishing. He was an unofficial stock market guru, enjoyed politics, camping, golfing, and watching his children's sports and activities when they were growing up.
Jim is survived by his wife Marisa of Fond du Lac, his children Brockton and Katrina Lombardo, both of Tomahawk and his step-son Chris (Desiree) Flores of Menasha. He is further survived by his parents Tom and Mary Lombardo of Sheboygan, his siblings: Nathan (Kelly) Lombardo of Sheboygan, Tim (Kristina) Lombardo of Sheboygan Falls and Stephanie Peaslee of Sheboygan; parents-in-law Steve and Pat Weerts of Shawano, brother-in-law William (Kelly) Weerts of DePere, sister-in-law Emily (Ben) Burr of Shawano, granddaughters Eva and Tahlia Flores, Brockton and Katrina's mother Sharlene Lombardo of Tomahawk, nieces, nephews, cousins, other relatives and many, many friends.
A visitation will be held on Saturday, December 16, 2017 at Zimmer Westview Funeral and Cremation Care Center, W2132 Garton Road in Sheboygan from 1:00 - 4:00 p.m. In lieu of flowers, memorials are suggested.
A Celebration of Jim's Life will be held in Tomahawk at a later date.