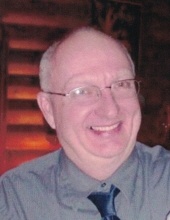 Our beloved husband, father, and Papa Jim passed to his heavenly home on Wednesday, August 23rd at Bellin Hospital in Green Bay. Jim was indeed a rare and special person and he died in death as he lived in life, suffering a rare heart rupture following a heart attack.

Jim was born on November 22, 1948 to parents Elton and Mae (Hickenbotham) Horneck in Plymouth, Wisconsin. They moved to Sheboygan where Jim attended Mapledale Elementary School, Urban, and North High graduating in 1967. Jim proudly served in the U.S. Army during the Vietnam War from 1969-1970. On October 18, 1975, he was united in marriage to Barbara Frasch at St. John's UCC in Sheboygan. Jim worked as an auto body frame specialist until his retirement at age 62

Growing up, Jim's grandparents lived near the fairgrounds and the sounds of the racecars brought him a life-long love of cars and racing. Jim (the Cricket Horneck) was a past member of the Eastern Stock Car Association where he raced for many years in the Sportsmen division in the Happy Joe Special. He earned fast-time many times and finished 3rd in points in 1983. His wife shared his love for racing and joined him in the pits as his official scorekeeper.

As a young boy, Jim loved going up north to Grandpa Hick's cabin. Being in the north woods became one of his greatest joys in life; hunting, snowmobiling, 4-wheeling or just cutting wood and spending time with family. Jim was able to fulfill his lifelong dream of owning his own cabin, which he built with the help of his brother Dennis. Capable of doing anything, they took a two-car, two-story garage and moved it up north remodeling it into a beautiful family cabin. He took great pride in his interior carpentry and added a large stone fireplace to be enjoyed on cold winter nights while snowmobiling. He felt lucky to be able to pass this family tradition to his children and grandchildren who also love the time they spend in Papa's favorite neck of the woods.

Jim spent the last five days of his life up north at the cabin with his family doing all of the things that brought him the most joy in life. Sitting on the deck with Stacy and Duste enjoying the view of the lake, cutting down a tree with Dan, go-karting in Eagle River watching Sawyer take his first solo ride, enjoying a good meal at Ed's in Argonne, and eating pancakes with Harlow and Sawyer. What a blessing it is to have these precious memories with us now.

As a person, Jim was a selfless man; there wasn't anything he couldn't or wouldn't do for others. He drew strength from his children and was the most wonderful father and grandfather a child could ever want. He had a kind and gentle soul with a great sense of humor. He was a patient and loving husband and father and a fun and goofy Papa who simply brought joy and happiness to all who knew him. In his retirement, Jim enjoyed his daily walks with Bernie, morning coffee with his group at McDonalds, working on the latest project for his children, wife, or the cabin, or anyone who stopped and needed a helping hand. He loved the cooler weather and beautiful colors of fall and he and Barb were looking forward to watching football again cheering on the Packers. Being retired, he was always available to babysit and he enjoyed every moment he could spend with his grandkids.

In lieu of flowers, memorials will be given to St. Jude's Children Hospital in memory of Jim's love for all children and Wounded Warriors in honor of his love for country and those who serve.

To our Daddy & Papa - Our hearts are broken. If love provided life you would have lived forever. We were everything to you, and you were everything to us. We know you are taking good care of our Chase and being a great Papa to him in heaven. You will never be forgotten. Now and as time passes we will talk of all our wonderful memories and all the happiness you brought into our lives. I love you Papa ‘Eef'. Love, Sawyer and Harlow.