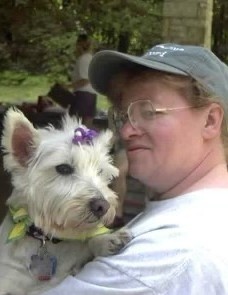 Jackie was born on May 30, 1957, in Sheboygan to Milton and LaVerne (Hasche) Bitter. She graduated from Howards Grove High School with the Class of 1975. Jackie was united in marriage to Michael Filipiak on October 29, 1987, at St. Mark’s UCC in Cleveland, WI. Jackie retired from her position as a pharmacy technician at Walgreens after 40 years.

Jackie loved animals – especially dogs and was active in the Sheboygan Dog Training Club and the Westie Rescue of Missouri. Jackie was involved as a leader in 4-H for many years with the Herman Cheerio Club.

Jackie is survived by her sister, Cindy Bitter; brother, Dennis Bitter; sisters-in-law, Laurie (Randy) Lawrenz, Barb Bitter, and Kay Bitter; friend, Chrissy Wetzel; nieces and nephews; great-nieces and great-nephews; and other relatives and friends. Jackie is also survived by her beloved dogs who were her pride and joy, Tater, Barkley, and Bella.

A Funeral Service will be held for Jackie at 11:00 AM on Thursday, December 30, 2021, at Zimmer-Westview Funeral Home with Pastor DuWayne Hanke officiating. A public visitation will be held from 9:30 AM until the time of the service. Jackie’s funeral will be livestreamed and available at a later date from her obituary page.

Jackie’s family would like to thank the ICU staff at St. Nicholas Hospital as well as the staff at the Froedtert ICU for their care.

In lieu of flowers, a memorial fund will be established in Jackie’s name.

If you would like to leave a message of sympathy for Jackie’s family, please visit www.zimmerfuneralhome.com.

To order memorial trees or send flowers to the family in memory of Jackie Filipiak, please visit our flower store.