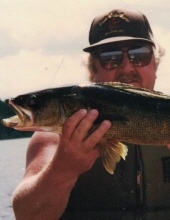 Harold A. Brandt, 68, Town of Sheboygan Falls, passed away Monday, May 21, 2018 at home. He was born September 30, 1949, in Sheboygan, to the late Harold and Minne (Berg) Brandt. Harold served his country in the United States Army from 1968 until 1974, when he received his honorable discharge. While in the Army, Harold served in Vietnam, where he received two Purple Hearts and two Bronze Stars. On October 3, 1970, he married the former Darlene Groeschel. He resided in Sheboygan Falls near Johnsonville his entire life and was employed by the cheese factory for three years before working in the foundry at Kohler until his retirement.
Harold enjoyed spending time with his wife and children, birdwatching, playing cards, gaming, fishing in Canada and North Dakota, charter boat fishing and chasing squirrels. He was also an avid sports fan, especially the Badgers, Packers and Brewers. Harold was also an avid fisherman, including charter boat fishing and cherished every moment he got to spend on the waters of Lake Winnebago.
In addition to his wife of 47 years, Darlene, survivors include his three sons, Jeremy, Brian and Nathan (Pa Yang) Brandt; one brother, Roland (Dorothy) Brandt; two sisters, Carol Brandt Reinemann and Marilyn (Larry) Brandt Oakley; his very close buddy, Darin Reinemann, his best friend Dennis "Fritz" Heller and his special family friend, Vernon Reichert. He is further survived by many nieces, nephews, other relatives and friends.
In addition to his parents, he was preceded in death by two brothers, David and Orville Brandt.
In accordance with Harold's wishes, no services will be held. Please visit www.zimmerfuneralhome.com to sign the guestbook.

Event Information
In accordance with the wishes of the deceased, no services will be held.
To order memorial trees or send flowers to the family in memory of Harold Brandt, please visit our flower store.