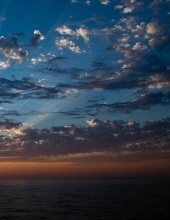 Glenn Grunewald, 77, of Sheboygan, passed away November 16, 2017 at Sharon S. Richardson Community Hospice. Glenn was born November 21, 1939 to the late Herbert and Florence (Boeldt) Grunewald. He served his country in the United States Air Force from 1957 until 1961. After returning from the military, Glenn worked as a lathe operator at Hayssen Manufacturing Company. He worked at various manufacturing companies before retiring from B&F Precision Machining. As a young man, he enjoyed wood sculpture and later enjoyed crossword puzzles.
Survivors include his nieces and nephews, Linda Grunewald, Lora Stover, Mary Ann Thomas and Gerald Grunewald, Jr. and two sisters, Bernice Cole and Gloria Hunt.
In addition to his parents, he was preceded in death by his brother, Gerald Sr.
In accordance with Glenn's wishes, no services will be held.
The family would like to extend a special thank you to Dr. H. Marshall Matthews, his staff and the staff of Sharon S. Richardson Community Hospice.
In lieu of flowers, memorial donations can be made to Sharon S. Richardson Community Hospice in Glenn's name.

Event Information
In accordance with the wishes of the deceased, no services will be held.
To order memorial trees or send flowers to the family in memory of Glenn Grunewald, please visit our flower store.