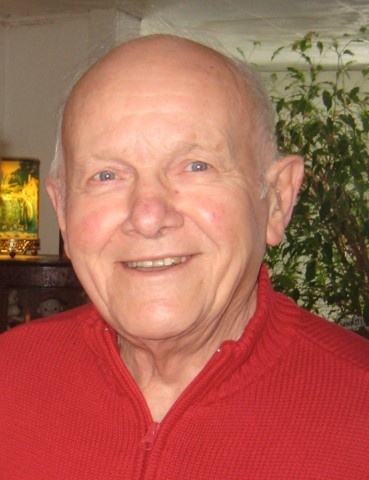 Gilbert (Gib) Sternitzky passed peacefully at the Sheboygan Senior Community on April 20, 2021, with his daughter at his side.

Gilbert was born in Plymouth Wisconsin to Gilbert Sr. and Frieda (William) Sternitzky. He graduated from Plymouth High School in 1949 and from Lakeland College in 1958 with a Bachelor of Science degree. He was a Korean War veteran. In 1954, he married the love of his life, June Stern, to whom he remained happily married for 61 years until her death in 2016. Gib was a member of Bethany Lutheran Church in Kohler.

Gib was an easy-going, kind, and generous man with sparkling blue eyes and a charming sense of humor that touched everyone who knew him. His high school yearbook saying said, "he puts his troubles in a pocket with a hole in it". That sentiment carried throughout his life.

His 30+ year career was spent at Howards Grove High School teaching general science, chemistry, and physics. He enjoyed a long retirement, many trips to casinos, pie, and was happy to be able to continue living in the house that he built out of lumber he recovered from a local barn.

Gib touched many people in his life and he is dearly missed.

A funeral service and life celebration will be held at Bethany Lutheran Church, Kohler, WI, at a later date.

To order memorial trees or send flowers to the family in memory of Gilbert Sternitzky, please visit our flower store.