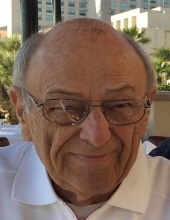 Gerhard "Gerry" Pauly passed away Monday, November 25, 2019 at Aurora Sheboygan Memorial Hospital. He was 79 years old.
Gerry was born June 5, 1940 in Sheboygan, the son of Gerhard and Elvira (nee Schirmer) Pauly. He graduated from Central High School and went on to earn his Associates Degree in Biological Science from UW Green Bay. From 1958-1963, he proudly served his country in the United States Navy. During this time, he served as a medical technician at the naval hospital in Bethesda, MD, aboard the USS Calvert and the USS Valley Forge, and lastly at the naval hospital in San Diego, CA.
On March 2, 1962, he was united in marriage with Connie Young in San Diego, CA.
For 30 years, Gerry worked for the Aurora system, formerly Sheboygan Memorial Medical Center. He retired in 1993 as the Administrative Director of Clinical Laboratory Services. Gerry was a proud member of the Clinical Laboratory Management Association, Inc as well as the American Society of Clinical Pathologists.
Though a private person, his love for music led to frequent performances with various bands over the years, most notably the "Downbeats" and the Sheboygan Municipal Band. He was a travel enthusiast and loved the planes themselves as much as the journeys they led him on, including creating more than 30 to-scale models of commercial aircraft he traveled. When not traveling at 35,000 feet, he often found himself enjoying nature's tranquility at Mauthe Lake, fishing and camping with his family.
Gerry is survived by his wife of 57 years, Connie, and their children: Elizabeth Marzouki (David Schnable) of Sheboygan, David (Angela) Pauly of Fayetteville, NC and Anthony Pauly (Kimberly Stattner) of Tarpon Springs, FL. He is further survived by 5 grandchildren: Dr. Matthew (Dr. Erica Chou) Harmelink, Katherine (Jonathan) Roth, Christopher Marzouki, Kameryn Pauly and Hanna Montague; great-grandchildren Nathan and Elaina Harmelink, brothers and sisters-in-law: Linda Branan, Steven (Nancy) Young and Debra (Jack) Innis, all of OH, other relatives and friends. He is preceded in death by his parents and sister Annette McDonald.
According to Gerry's wishes, he will be laid to rest at Greenlawn Memorial Park in a private family service.

To order memorial trees or send flowers to the family in memory of Gerhard Pauly, please visit our flower store.