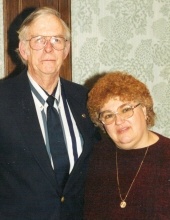 Kathleen L. Goll, 74, of Sheboygan, passed away on Sunday, March 15, 2020. George F. Goll, 84, of Sheboygan, passed away on Saturday, May 2, 2020, both at Sheboygan Health Services. Kathleen was born November 25, 1945 in Sheboygan to Erwin and Esther (Justus) Thiel. George was born March 8, 1936, in Sheboygan Falls, to the late Fredrick and Helen (Salverson) Goll.
On July 18, 1964 George and Kathy were united in marriage at St. Peter Lutheran Church.
Kathleen graduated from South High School with the Class of 1963 and went on to receive her degree in childcare from LTC. Kathleen did babysitting in the basement of North Bowl Lanes for many years, and was a nanny for many local families, she also cleaned houses. Kathleen was the seamstress for the ELMS Band and the Top Hats. She enjoyed jigsaw puzzles, puzzle books, reading, baking, decorating her house on holidays both inside and outside, and gardening. She also was an avid collector of Roosters. Creating memories with her family and grandchildren was a passion of hers.
George was employed at Kohler Company from 1966 until he retired in 1999. He was also the equipment manager for Elms Band and the Top Hats. George was a crossing guard for Sheboygan Falls and dressed up as Darth Vader to entertain children in local parades. He was known in his neighborhood as "Grandpa Green Jeans." He enjoyed spending time with his grandchildren, hanging out with his friends, collecting trains and going to the senior center with Kathy.
Kathleen and George are survived by their children; Susan (Brian) Haws Carrera, Kristin (Shawn) Madson, Debbie Goll, David (Dawn Rose) Goll, Julie Goll and Joseph (Jamie) Goll, grandchildren; Sarah, Jill, Samuel, Alexandria, McKenzie, Vernon, Franklin and Angela; their great grandchildren; one great-great-grandchild; Kathleen's siblings; Elaine Arpke, Shirley Heibel, and Keith (Julia) Thiel, George's brother, Gene (Carol) Goll; Kathleen's brother-in-law Jeff Bichler, and many nieces, nephews, other relatives and friends.
The couple was preceded in death by their parents, Kathleen's sister Kandy Bichler, Kathleen's brother Jimmy Thiel, her brothers-in-law; Ralph Arpke and Jerry Heibel and their nephews Steven Arpke and Scott Goll.
A Private family committal will be held on Friday, June 5, 2020 at St. Lucas Cemetery.
A Celebration of their Lives will be held at a later date..
In lieu of flowers a memorial fund has been established in Kathleen and George's name.
The family would like to thank the staff at Davita Dialysis, Sheboygan Health Services, Waterford in Plymouth, and Community Care for taking care of our parents all these years. Also, to Heartland Hospice for their care, support and compassion.
Please visit our website to leave your condolences for the family www.zimmerfuneralhome.com

To order memorial trees or send flowers to the family in memory of George Goll, please visit our flower store.