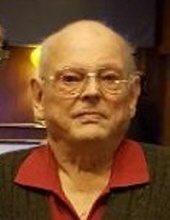 Franklin D. Hunter, 84, of Sheboygan, passed away Sunday, March 25, 2018 at Sharon S. Richardson Community Hospice after a courageous battle with cancer. He was born March 25, 1934, in Davenport, IA to the late Freeman and Nelda (Schlaefke) Hunter. He was united in marriage on January 24, 1959 to the former Phyllis Mohr. She preceded him in death on February 15, 2016. He served his country in the United States Army from 1956 until 1958.
Franklin and Phyllis enjoyed attending dances throughout the area. He enjoyed spending time with his family and friends, gardening and spending time outdoors. Franklin was also an avid bowler, enjoyed woodworking and collecting stamps and coins.
Franklin is survived by his four children, Geraldine (Mark) Bergin, Donna (fiancé, Jim Brunnbauer) Simpson, Tammy (David) Biszmaier and Gary Hunter; six grandchildren, Shelley (Jon) Notz, Jennifer (Josh) Behr, Eric, Jeffrey (Ashley) and Sarah Biszmaier and Alec Hunter; three great-grandchildren, Benjamin, Jaylin and Clarissa
In addition to his parents and wife, he was preceded in death by his daughter-in-law, Kimberly Hunter.
The family and friends will gather to celebrate Franklin's life in the chapel at Greenlawn Memorial Park, 6706 Superior Avenue on Thursday, March 29, 2018, from 12:30 p.m. until 2:30 p.m. Military honors will be held at 2:30 p.m. In lieu of flowers, memorials in his name are appreciated. Please visit, www.zimmerfuneralhome.com to sign the guestbook.