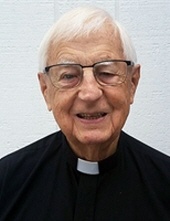 With hope in the resurrection, we commend to the Lord Reverend Michael Patrick Dineen, who died on May 19, 2020, at the age of 96. Fr. Michael was born on a dairy farm in Mequon, WI and in his youth took a great interest in dairy farming and received many awards in his ten years as a 4-H member and Jr. Leader. He went to Messmer High School and from there enrolled at St. Francis de Sales Minor Seminary.

Fr. Michael was ordained to the priesthood by Most Reverend Roman Atkielski, Auxiliary Bishop, Archdiocese of Milwaukee, on May 28, 1949, at the Cathedral of St. John the Evangelist, Milwaukee. He was appointed to his first assignment on August 9, 1949 to serve as an assistant at St. Clement Parish, Sheboygan. He later served as an Associate Pastor at Holy Rosary, St. Agnes and St. Matthias in Milwaukee, St. John Vianney, Brookfield, and St. Patrick's, Elkhorn.

In 1954 He was asked by Archbishop Meyer to assume the role of Executive Secretary of the National Catholic Rural Life Conference. He served in that position for ten years and then became the Publisher and Editor of Country Beautiful Magazine and Books, the publishing arm of The National Catholic Rural Life Conference. The mission of Country Beautiful was to preserve the family farm and the small rural communities that served the farmers and their families.

During his time at Country Beautiful, Fr. Michael edited and published over one hundred books, all of which are registered in the Library of Congress. Several of the Country Beautiful books were on the New York Times best seller list and many of the books won national awards for creative design and unique editorial content.

Fr. Michael continued his interest in Rural Life when he was assigned three rural parishes in the La Crosse Diocese serving St. Mary's Ridge, St. Augustine's in Norwalk, WI and St. Patrick's in Mauston, WI. While Fr. Michael was in La Crosse he developed an interest in caring for the sick and through 1600 hours of CPE work became a certified chaplain. His most favorite pastoral assignment was at Kenosha Hospital and Medical Center in Kenosha where he served as director of Pastoral Care for over fifteen years.

Fr. Michael retired at the age of 75 and returned to the city of his first pastoral appointment, Sheboygan, WI. He was the main help-out or assisting priest at Immaculate Conception and Ss. Cyril and Methodius Parishes. During his retirement he served as Volunteer Chaplain at St. Nicholas Hospital in Sheboygan and as a very active Chaplain of The Knights of Columbus, Our Lady of the Rosary Council, 722. In his retirement he continued his love for the land, growing and cultivating his beautiful garden of hybrid roses and a host of other flowers and special plants.

One of Fr. Michael's missions in his Senior Priest days was to be present and active at Christ Child Academy in Sheboygan. He spent many hours, teaching, supporting, and participating in its activities and especially in its mission to fulfill the mandate of Jesus: "Let the little children come unto me."

He was active unto the very final days of priesthood, some 71 years, serving as well, a multitude of parishes in Racine, Kenosha, and Lake Geneva and its beautiful surroundings.

Fr. Michael is preceded in death by his parents, Charles and Catherine Dineen, brothers, Charles Jr., Robert, Gerald and John, and his sister Grace Bueno. He is survived by his sister, Margaret Swan Baehler, beloved cousins, many nieces and nephews, personal representative, Kimberly Wendt who acted as an angel of mercy along with members of Hospice Care and countless friends and parishioners that he ministered to.

Due to the Covid pandemic, a Private Mass of Christian burial following appropriate safe distancing protocols will be celebrated.

A memorial fund has been established in the name of Reverend Michael Dineen for Christ Child Academy. 2722 Henry St, Sheboygan, WI 53081

Online condolences may be expressed at www.zimmerfuneralhome.com

To order memorial trees or send flowers to the family in memory of Father Dineen, please visit our flower store.