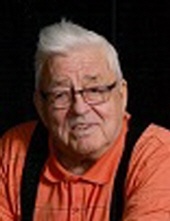 Eugene Maeuser, 85, formerly of Cleveland, passed away on Sunday, October 18, 2020 at Sharon S. Richardson Community Hospice in Sheboygan Falls. Eugene was born in the Town of Herman on January 20, 1935 to Ewald and Roma (Conrad) Maeuser. Eugene graduated from Kiel High School with the Class of 1953. Throughout High School he was very active with FFA.
On June 2, 1962 he was united in marriage to LaVerne Handrow. She preceded him in death on May 15, 2013. Eugene worked at area Feed Mills for over 40 years.
Having a strong faith, he was a member of St. Mark's UCC in Cleveland for over 50 years. Eugene was very active at church serving as the Bell Ringer for over 40 years and on the Church Consistory. He also enjoyed playing on an area church dartball league.
Eugene had a love for nature, enjoying spending time in his garden and feeding the birds. His family will remember him keeping the popcorn bowl and candy dish full. His family was very important to him. He was always at his grandchildren's events and activities cheering them on. Playing sheepshead and tinkering in his garage were also favorite pastimes of his.
Eugene is survived by his two daughters, Lori (William) Roelse and Sandy (Larry) Perronne both of Cleveland, by six grandchildren, Andrew (Hannah) Roelse, Nathan Roelse, Alex (Fiancée Paige Frendahl) Perronne, Alyssa (Richard) Hess, Abbey (Brett) Sheldon, and Emma Perronne, by his brother Carl Maeuser, sister Jeanette Meinnert, sister-in-law LouAnn (Fred) Engelhardt. He is further survived by nieces, nephews, other relatives, and friends. Eugene was preceded in death by his parents, wife, son Timothy, grandson Matthew Roelse, sister-in-law Judy Maeuser, and brother-in-law Norbert Meinnert.
Due to the Covid 19 restrictions, visitation will be livestreamed at 2:45PM with the service at 3:00 PM on our website.
Please join us at www.zimmerfuneralhome.com on Wednesday, October 28, 2020 for the Livestream of his visitation from 2:45 PM until 3:00 PM followed by his service at 3:00 PM. You will find the live stream on Eugene's obituary page. If you are unable to watch at that time, it will be available for you to view afterwards.

In lieu of flowers, memorials may be made to St. Mark's UCC, Cleveland in Eugene's name.
The family would like to thank the staff at Sharon S. Richardson Community Hospice for all their care, compassion, and support.

To order memorial trees or send flowers to the family in memory of Eugene Maeuser, please visit our flower store.