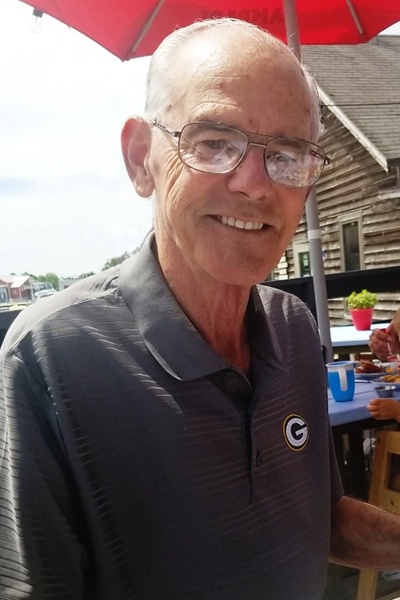 Eugene Frederick Aschenbach, better known as Gene, was a father, husband, brother, son and grandfather.  Surrounded by his family he passed away on April 29, 2021 at the age of 74 after a courageous battle with cancer.  He is survived by his wife, Sharon Aschenbach.  Two daughters, Tanya (Michael) Schwinn and Laura (Jeremy) Weber.  Two stepchildren, Jason Rautmann and Jessica (Josh) Barthels.  He is also survived by eight grandchildren; Natasha, Ariana and Nikolas Schwinn; Ellie, Alexander and Hadley Weber; Shane, Dylan and Logan Barthels.

Gene was born on April 28, 1947 to his beloved parents, Edgar Sr. and Georgianna (nee Schwanke) Aschenbach.  He was the third of five children.  He grew up in Sheboygan and graduated from South High.  After high school he joined the United States Navy and proudly served from 1966-1972, with most of his time being spent on the U.S.S. Enterprise.  When asked what his most favorite place to visit was while he was in the Navy his answer was home.

Gene led an active life, he enjoyed bowling, metal detecting, fishing and hunting.  His most favorite activity though was playing golf at Town & Country.  Gene’s favorite golf partner was his father.  They played almost daily while his dad was alive.  After that Gene honored his father and played in an annual family tournament in remembrance of Edgar.  Gene’s best golf score was 67.

Gene had a love of poker.  He would visit Las Vegas twice a year annually and stay at the Flamingo so he could play “his” machines.  On his final trip to Vegas, this past March, Gene hit his last royal flush.  What a way to go out – coming home ahead.

Gene’s greatest passion was his family and friends.  He enjoyed spending time with all of them.  He was a true family man and would do anything to help those who really needed it.  He loved with all his being and he will be truly missed.

Gene was preceded in death by both his parents, step-son David Rautmann and brother-in-law Fredrick Zitzer.

The family would like to thank the Sharon S. Richardson staff for helping Gene in his final days.  They helped him fulfill his final wish to die peacefully at home.  A special thanks to his nurse Michelle, you provided not only Gene but the rest of the family amazing care and understanding.

A Funeral Service for Gene will be held at 1:00 PM on Monday, May 3, 2021, at Zimmer Westview Funeral and Cremation Care Center, W2132 Garton Rd., in Howards Grove.  The family will greet visitors at the funeral home on Monday from 10:00 AM until the time of service.  Gene will be laid to rest at Greenlawn Memorial Park with military honors to follow the graveside service.

In lieu of flowers, a memorial fund has been established in Gene’s name.

To order memorial trees or send flowers to the family in memory of Eugene Aschenbach, please visit our flower store.