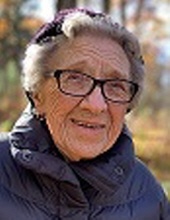 Esther Roselyn Velten (nee Olson) was born in Maple Valley, Wisconsin, on September 20, 1922, and passed peacefully after a long life on October 5, 2020, following a brief illness. Esther is survived by her son, Richard Velten (Linda Covillon), two grand-daughters, Inga Velten (Rob O'Connell) and Anna (Kurt) Svensson, three treasured great-grandchildren, Grainne and Eamonn O'Connell and Gideon Svensson, brother Stanley (Suzy) Olson, sister Eileen Block, and sister-in-law Ellen Olson. She was predeceased by her husband, Raymond Velten, her daughter-in-law, Vickie Velten, and by beloved siblings Leona Olson, Richard Olson, Millie Peterson, Gilbert Olson, and Clifford Olson.
Esther took great pride in her family, work, and hobbies, which included caring for beautiful flowers and vegetables, bird-watching, and baking amazing apple pies and other treats for her family. She often reminisced about a happy childhood on her family's farm and her young adulthood in Milwaukee, where she worked in a manufacturing plant during World War II, married the love of her life, and raised their son. Esther and Ray later settled in Green Bay, and they spent their retirement summers surrounded by nature at "the cabin" in Oconto County.
Cremation has taken place and a private family service was held. Burial at Maple Valley Cemetery in Suring will follow at a later date.
Everyone in Esther's family is grateful to the many friends and neighbors who helped fulfill her wishes to stay in her home for as long as possible. It was truly her happy place, and many people who loved her helped to make it so.

To order memorial trees or send flowers to the family in memory of Esther Velten, please visit our flower store.