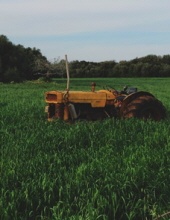 Edmund A. Schulz, 98 of rural Elkhart Lake, passed away peacefully on Tuesday, October 13, 2020 at home.
He was born July 14, 1922 in the Town of Herman, the son of Albert and Sophie (Schneider) Schulz. He attended school at Schwarzwald and attended welding school. When he was 14, upon his father's untimely death, he began farming with his mother. He spent his entire life on the farm homestead.
On October 6, 1945 he married Marion Baumann, the love of his life. Edmund and Marion ran the dairy farm and were very proud of the numerous Grade A milk certificates they earned.
Edmund was a lifelong member of St John's UCC Schwarzwald. He was a member of St John's brotherhood, a twenty-five plus year member of the Howards Grove Lion's Club, and a member of the Cleveland Coop, Farm Management Ass., and Farm Bureau. He enjoyed visiting and playing cards, especially sheepshead.
Edmund is survived by his son James (Sharon) Schulz of Plymouth, three grandchildren: Sarah (Jason) Peeks, Deborah (Matthew) Mielke, and Timothy (Nadine) Schulz. He is further survived by 10 great grandchildren, many nieces, nephews, other relatives and friends.
He was preceded in death by his parents, wife Marion, five brothers and five sisters.
Due to covid 19 restrictions a memorial service will be held at a future date.
In lieu of flowers a memorial fund will be established in Edmund's name.
The family would like to thank Home Sweet Home Again for the wonderful care he was given in his final years.

To order memorial trees or send flowers to the family in memory of Edmund Schulz, please visit our flower store.