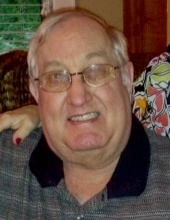 Ed Mauer, 81, of Kohler, passed away on Wednesday, July 18, 2018 at Sharon S. Richardson Community Hospice in Sheboygan Falls. He was born December 19, 1936 to Edward and Julia ( Langenfeld) Mauer in Sheboygan.
Ed was a graduate of Sheboygan Falls High School, and went on to proudly serve in the US Army during the Korean Conflict.
On November 29, 1969 he was united in marriage to Judy Kaat at St. John's in Kohler. Ed worked for Bemis Mfg. and retired after 43 years.
Ed was a devote member of St. John's in Kohler, serving under Fr. Louis Wilmek, Fr. Tom, Fr. Bob, Fr. Joe, and Eileen Mischock as trustee, treasurer, usher, and everything else they needed him to be. Ed was quite the character, he had an amazing sense of humor. Family was important to him and creating wonderful memories with them was his passion. Judy was his number 3, his mother came first, the church came second, and she wouldn't of wanted it any other way. Earlier in Ed's life he was an avid bowler in the Sheboygan All-Star League, where he had two 299 games. Ed also loved his fishing trips to Canada.
Ed is survived by his loving wife Judy of Kohler, three sons; Tim (Stephanie) Mauer of the British Virgin Islands, Curt (Kathy) Mauer of Kohler, and Lee Mauer of Sheboygan, by three grandchildren; Dr. Alex (Fiancée Mike Rozzo) Mauer, Ryan Mauer, and Julia Mauer, by his brother Joe Mauer, sister Mary Jane Huibregtse, sisters-in-law Sue (Dave) Prange and Kathy Lutzke. He is further survived by many nieces, nephews, other relatives and friends. Ed was preceded in death by his parents, and siblings; Rosetta, Kathleen, Loretta, Ralph, Elroy, Eugene, Claude, and Henry.
Following Ed's wishes a private celebration of his life will be held at a later date.
In lieu of flowers a memorial fund will be established in Ed's name.
The family would like to express their gratitude to the staff at Sharon S. Richardson Community Hospice, Pine Haven Rehabilitation Unit, St. Nicholas at home nurses, St. John's Kohler, Connie & John Stevens, and special friends Jerry & Maria Hirt and Laurie Kuplic who stood by him until the end.
Judy says "You got your wings my Love fly high"

To order memorial trees or send flowers to the family in memory of Ed Mauer, please visit our flower store.