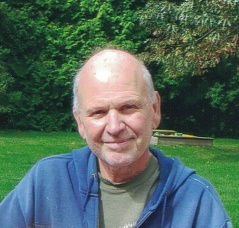 Dennis Scroggins, 67, passed away on February 27, 2021, from complications of Amyotrophic Lateral Sclerosis (ALS) with his children by his side.  He was born in Sheboygan on May 25, 1953, to the late William and Audrey (Krueger) Scroggins. On June 1, 1974, Dennis married Nanette Lucynski.  Together they raised their two children, Stacy and Dustin, in Sheboygan Falls.  Nanette preceded him in death in 2001.

Dennis was a carpenter by trade.  After working with his father for many years, Dennis started his own business.  He was the proud owner of Dennis Scroggins Construction Co.

Dennis was an excellent cook.  He made his own sauerkraut that he enjoyed sharing with family and friends. He also dabbled in beekeeping. He especially loved putting a heaping spoonful of delicious honey into his morning hot chocolate.  Dennis loved to spend time at his cabin on Post Lake where he enjoyed relaxing, fishing, hunting, and riding ATVs.  Many special memories were made with family and friends at the lake.

A private family service will be held for Dennis.  He will be laid to rest at Greenlawn Memorial Park next to Nanette.

In lieu of flowers, memorial donations can be made in Dennis's name to the ALS Association of Wisconsin or to The Gathering Place at St. Paul Lutheran Church in Sheboygan Falls.

Dennis and his family would like to extend a heartfelt thank you to the following doctors and nurses that have helped him over the years; Dr. Michael Johnson and his staff at Sheboygan Internal Medicine Associates, Dr. S. Mark Bettag and his staff at Matthews Oncology, the interdisciplinary team at the ALS clinic at Froedtert Hospital, all of the wonderful nurses on the 2nd floor 1 Day Surgery Unit, and finally the doctors and nurses that helped him through his last days in the ICU at St. Nicholas Hospital in Sheboygan.

They would also like to thank the following individuals that have spent countless hours visiting, preparing food, taking Dennis to appointments, and just being there in his time of need; Bill and Sue Dicke, Mike and Bev Daly, Dave and Sandy Janke, Dave Martin, Gary Weckwerth, John Lucynski, Sherrell Dean and Lindsey Aderman. Without the help of Dennis’s caregivers, he would not have been able to stay in his home for the length of his illness. All your care and companionship will always be remembered.

To order memorial trees or send flowers to the family in memory of Dennis Scroggins, please visit our flower store.