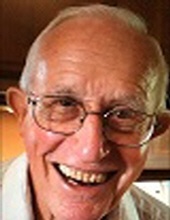 Danny was a machinist at Hayssen, Inc. and farmer. The day before his wedding, September 2, 1950, he received his draft notice for the Army. Danny and Edith honeymooned at Wisconsin Dells and left for Camp Carson in Colorado Springs, where he served for 2 years. They returned to Sheboygan to be close to family and started their own family. The summer of '73, they moved to a farm near Howards Grove where he lived happily the remainder of his days. Danny was active in his community, being a member of Knights of Columbus, a Cub Scout leader, the Holy Name Society, and volunteered his services for mass at St. Cyril and Methodius in Sheboygan, and St George in Elkhart Lake.

Danny is remembered as a kind and generous, family man. He delighted in attending numerous events supporting his children and grandchildren in sports, music and theatrical events, often in suit and tie. He enjoyed an active retirement weaving with Edith, gardening, and canning. Life on the farm wasn't always easy, but after a particularly productive day and when his family was gathered round, he would exclaim "My heart is singing!" Danny loved to watch the Packers! His family across Wisconsin and the country, were sure that they could hear him celebrating a touchdown with clapping and cheering. He was known for his big smile, his generous tipping, and boisterous laugh. He will be fondly remembered and dearly missed.


To order memorial trees or send flowers to the family in memory of Daniel Brulla, please visit our flower store.