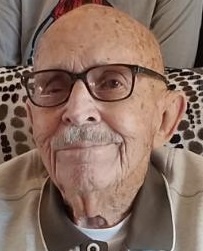 Charles was born on July 26, 1924, to Charles and Myrtle (Lowe) Gotchy in Antigo, WI. He attended school in Minocqua. After graduation, Charles enlisted in the United States Navy during World War II and served in Okinawa from 1943-1946. On October 18, 1947, he married Virginia Witt in Minocqua.

When Charles and his family moved to Sheboygan, he worked as a plumber – first for Winter Plumbing and Heating, and then retiring from Aldag Plumbing.

A Funeral Service for Charles will be held on Saturday, May 1, 2021 at 12:00 PM at St. Luke United Methodist Church, (623 Ontario Avenue, Sheboygan) with Rev. Cindy Thompson officiating. Friends may call on Saturday, at the church, from 10:00 AM until the time of service. Entombment will be at Greenlawn Memorial Park. COVID - 19 guidelines will be followed, including social distancing, limited seating, and the wearing of facemasks.

Please visit www.zimmerfuneralhome.com to leave a message of sympathy for the family.
In lieu of flowers, donations may be directed to Sharon S. Richardson Community Hospice, Sheboygan County Cancer Fund, and St. Luke United Methodist Church.

To order memorial trees or send flowers to the family in memory of Charles Gotchy Jr., please visit our flower store.