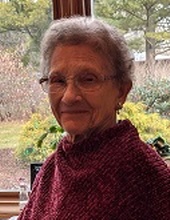 Caroline D. Ney, 91, of Sheboygan, passed away peacefully surrounded by her family, on Friday, October 2, 2020 at Kindred Hearts Assisted Living in Plymouth. She was born May 29, 1929 in the Town of Sheboygan Falls to Arthur and Norma (Winkel) Klemme. She attended local schools and was baptized and confirmed at Saron UCC.
On October 23, 1948 she was united in marriage to Herbert Ney at Saron UCC. He preceded her in death on August 16, 2010.
Caroline is a member of Bethany Lutheran Church in Kohler.
Caroline took great pride in being a mother, grandmother, and great-grandmother and a very dedicated homemaker. Then in her later years she worked at the Sheboygan Retirement Home, retiring after 15 years of dedicated service.
She was loved by all who met her. She made friends easily and was a genuinely sweet soul. She enjoyed the simple things in life such as dining out, playing BINGO, ice cream both playing the accordion and listening to music. She loved watching wildlife such as deer, rabbits, squirrels and especially birds. The sight of a cardinal was very special to her, she would say "That's my Roger." She also had a surprising affection for her grand dog Holly.
She is survived by two sons, Larry (Debbie) Ney of Plymouth and Rick (Marilyn) Ney of Sheboygan, by two grandchildren; Wendy (Chad) Schmitt, and Wayne (Valarie) Ney, two step-grandchildren, Kimberley Wassilus, and Karrie (Joe) Lawrence, by two great-grandchildren; Chad Schmitt Jr., and Kaylee Ney and four step-great-grandchildren, Andrew and Isaac Lawrence, and Turner and Macartney Schmitt, she is further survived by one sister Elfrieda Wals of Mesa. AZ and brother-in-law Gerald Sipple of Sheboygan Falls, and by four brothers-in-law, and two sisters-in-law, she is further survived by nieces, nephews, other relatives and friends. Caroline was preceded in death by her husband, beloved son Roger, her parents, and four sisters: Evangeline Ney, Delores Sipple, Shirley Pannell, and her infant sister Mildred Klemme.
A Private Memorial Service will be held. Inurnment will follow at Greenlawn Memorial Park. A Public Visitation will be held on Friday, October 9, 2020 from 3:00 PM to 6:00 PM at the Zimmer Westview Funeral & Cremation Care Center, W2132 Garton Rd. Sheboygan.
In lieu of flowers a memorial fund will be established in Caroline's name.
The family would like to especially thank the staff at Kindred Hearts Assisted Living Facility and Heartland Hospice for their outstanding care.
I have fought the good fight, I have finished the race, I have kept the Faith. 2Timothy 4: 7.