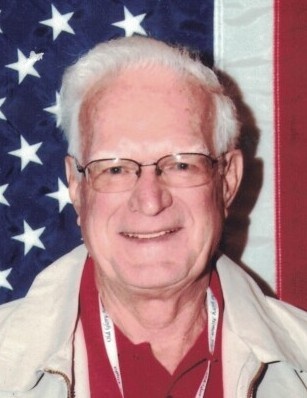 Bert was born in Sheboygan on September 13, 1928, to Hilbert and Frances (Hertel) Dreps. He graduated from Central High School with the Class of 1946. Bert enlisted and sailed around the world on the USS Tarawa from 1948-1949. He was united in marriage to Lois Papendieck on June 14, 1952. Together they raised six children and made their home in Sheboygan. Lois passed away in 1995. Bert was then united in marriage to Marjorie "Marge" (Lorenz) Horness on February 7, 1997. Marge passed away in 2020.

Bert worked in the Tool and Die industry for many years before his retirement in 1992.

Bert was always an active man, with many different interests including hiking, biking, golf, skiing as well as hunting and fishing - especially with one or more of his children or grandchildren. He especially enjoyed dancing and travelling with both of his wives.

Bert was preceded in death by the mother of his children, Lois; second wife, Marge; son, Jerry; sister, Lorraine (Kenneth) Schultz; brother-in-law, Carlos Steil; and other relatives and friends.

A memorial mass will be held on Friday, December 10, 2021, at 12:00 PM at St. Dominic Catholic Church (2133 N 22nd St, Sheboygan, WI 53081) and will be officiated by Father Norberto Sandoval. A public visitation will be held from 11:00 AM until the time of the service at the church. Bert's service will be available afterwards from his obituary page at zimmerfuneralhome.com.

Bert will be inurned at Calvary Cemetery in Sheboygan.

In lieu of flowers, a memorial fund will be established in Bert's name.

If you would like to leave a message of sympathy for Bert's family, please visit www.zimmerfuneralhome.com.

To order memorial trees or send flowers to the family in memory of Bert Dreps, please visit our flower store.