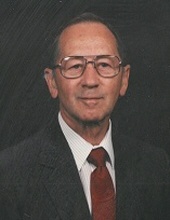 Augustine "Augie" J. Stahl, 101, of Sheboygan Falls, passed away peacefully on Friday, August 28, 2020 at Pine Haven Christian Home in Sheboygan Falls. He was born March 19, 1919 in Sheboygan to Henry and Caroline (Trimberger) Stahl. Augie attended Holy Name School and graduated from Central High School with the Class of 1937.
Augie proudly serve in the Army Air Force from 1942 to 1946 during WWII. On February 3, 1944 he was united in marriage to the love of his life Marie Meyer at Holy Ghost Catholic Church in Hammond, LA. She preceded him in death on March 19, 2005.
Augie was in charge of payroll for R-Way Furniture until his retirement on June 6, 1982. He was a lifetime member of Holy Name of Jesus Catholic Church, Knights of Columbus, and the Catholic Order of the Foresters. Augie was active in sports including bowling and watching the Green Bay Packers. He enjoyed reading The Sheboygan Press and listening to Lawrence Welk, Mitch Miller, and Polka music.
He is survived by his two daughters, Mary (Tom Katte) Stahl-Katte of South Milwaukee and Margaret Klatkiewicz of Town of Sheboygan, by five grandchildren; Melodie Katte, Michael (Rachel) Katte, Matthew (Natalie Martens) Katte, Andrew (Kristin) Klatkiewicz, and Katherine (PK Kaeovongphet) Klatkiewicz, three great-grandchildren: Augie, Nicholas, and Maeve Klatkiewicz. He is further survived by nieces, nephews, other relatives and friends. He was preceded in death by his parents, wife Marie, brother Michael Stahl, three sisters; Viola (Konnie) Zajkowski, Sr. Carolyn Stahl SSND, and Caroline (Clarence) (Rudy Keller) Aulik, brothers-in-law: Robert Meyer, Raymond Meyer, and infant Francis Meyer, and sister-in-law Isabelle (Fred) Stiefvater.
A private graveside service will be held at Holy Cross Cemetery.
A Memorial Mass will be held at a later date.
In lieu of flowers memorials may be made to Fresh Meals On Wheels of Sheboygan Co. in Augie's name.
Augie's family would like to thank all the caregivers that have taken care of our Dad since entering assisted living. The staffs at Pine Haven Christian Community Giddings Ave., and most recently Covenant Home Haven Drive. During these difficult times of Covid-19, not being able to see our Dad in person, it was reassuring to know he was being well taken care of by the wonderful compassionate staff at Covenant Home. Thank you all!

To order memorial trees or send flowers to the family in memory of Augustine Stahl, please visit our flower store.